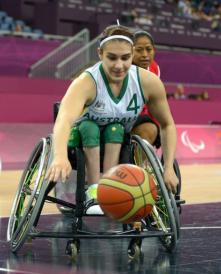 With the opportunity to secure second place ahead of the semi finals, the Australian Devils beat Canada on the back of a dominant second half performance, winning 73-57.

Full of confidence after their previous win against China, the Devils jumped out to a double-digit lead within the first quarter.

Utilising a couple of easy baskets in transition, Canada brought themselves back into the contest in the second term. Although a malfunctioning scoreboard temporarily stopped play, the Canadians’ momentum could not be halted as they turned the deficit around to lead by five points going into the main break.

Out of half-time, the Devils focused on the defensive end and with a full-court press, were able to score with transition lay-ups of their own. Amber Merritt and Sarah Vinci, who had combined for 20 points in the first half, led the charge and once Australia regained the lead, they never looked back.

A 42-21 second half set up the convincing victory as Merritt collected a stunning 34 points, seven rebounds, six assists and seven steals. Her all-round performance was complemented by 14 points and ten boards from Vinci, 14 points, seven rebounds and four assists from Georgia Munro-Cook as well as Jess Cronje’s first points of the tournament.

Having finished second in their pool, the Devils have set the stage for a mouth-watering rematch with host nation, China. The match will be played at 5:45pm AEST Sunday.