Devils earn silver at the IWBF U25 World Championships 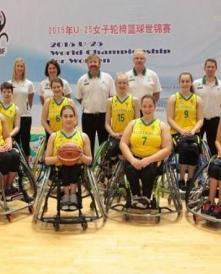 Despite not winning the ultimate prize, the Australian Devils have concluded a very successful U25 World Championship, earning a silver medal after a 35-44 loss to Great Britain.

A defensive battle saw the match tied at 6-6 by quarter-time, with the pressure from both sides enormous.

Uncontested shots were difficult to come by in the second term as well with neither side able to break the deadlock. The Devils finally got some breathing room through Georgia Munro-Cook, gaining a four-point lead at half-time.

A third foul to Amber Merritt just before the main break threatened to derail Australia’s momentum as Great Britain turned deficit into a three-point lead mid-way through the third quarter.

Australia were able to respond though and make it a one-point game as the match headed to a thrilling conclusion. Their opposition jumped out to a nine-point advantage with six minutes to play and needing an injection of tenacity, coach David Gould inserted Hannah Dodd and Jess Cronje into the game.

Their activity and speed around the court allowed Merritt to get free for a couple of mid-range baskets but Amy Conroy of Great Britain was not to be denied as her 19 points helped her team to the victory.

For the Devils, Merritt finished with a game high 21 points to combine with 12 rebounds while Georgia Inglis and Sarah Vinci added four each.