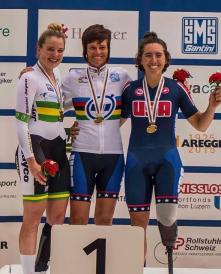 Cooke made it three in a row in the women’s T2 final, while team debutant Bridgwood claimed his maiden world title in the men’s C4 event.

Australia took five medals on the day with silvers to Alistair Donohoe (VIC), and Alexandra Green (NSW), plus bronze to Simone Kennedy (NSW).

It was a dominant performance from dual reigning world champion Cooke who completed the 14-kilometre course in a time of 28 minutes and five seconds to claim gold by over one minute on the Jill Walsh (USA) and Jana Majunke (GER).

“It feels surreal, but I’ve worked hard to prepare so I’m extremely happy,” said Cooke. “To win three in a row is unbelievable!

“It feels like a dream and I keep waiting for the bubble to burst! I’m over the moon with the win.”

Bridgwood covered the 31-kilometre course in 46mins 28seconds, 21 seconds ahead of the silver medallist Sergey Pudov (RUS) and over one minute ahead of bronze medallist Patrik Kuril (SVK).

“It was great to be selected for the Australian team, and to see the hard work in training paying off,” explained Bridgwood. “The win still hasn’t quite sunk in yet, but I’m sure it will!

“I was really surprised at my result. I wasn’t sure what to expect at the World Championships, compared to a World Cup.”

In the women’s C4 Alexandra Green earned the silver medal behind Shawn Morelli of the United States. Bronze went to Megan Fisher also the USA, who edged out Susan Powell by one second.

Earlier in the day Simone Kennedy picked up the bronze medal in the women’s C3 behind Jamie Whitmore Cardenas (United States) and Denise Schindler (Germany). Bianca Woolford finished fourth in the T1.