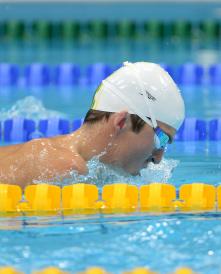 The Australian Dolphins have had another successful night in the pool at the 2015 IPC World Championships in Glasgow adding two silver and two bronze medals on night three of competition.

With 11-years under his belt on the Dolphins team Rick Pendleton had experience on his side diving into the men’s 100m breaststroke SB9 final.

After touching at the 50m mark in sixth placePendletonpowered through to the finish in 1:09.04 claiming the first bronze medal for the night and in a new Oceania record.

Pendleton said it was a “bittersweet moment” when he saw the score board and noticed a third place next to his name.

“For me finishing the race was a bit of a bittersweet moment, I looked up and I was hoping for slightly quicker time but then I noticed the number three next to my name and I was really happy to get that bronze medal,” said Pendleton.

Sean Russo picked up his first world championships medal in the men’s 100m backstroke S13, clocking in 1:01.10 to win the bronze medal behind Belarus swimmer Ihar Boki (56.74) and Iaroslav Denysenko from Ukraine (59.08).

“For me this medal signifies a lot of hard work and dedication to swimming; I couldn’t be happier with the result and I’m looking forward to what else I can achieve this week, and more importantly in the coming 12-months,” said Russo.

Australia’s latest world record holder, Sydney’s Tiffany Thomas-Kane added to Australia’s success gliding to the finish line in the women’s 50m butterfly S6 breaking the Oceania record and winning her first silver medal for the meet in 38.17 to add to her 50m breaststroke gold yesterday.

Meanwhile in other events, Jesse Aungles finished fifth in the men’s 200m individual medley, shaving 0.80 seconds off his personal best time that he set earlier in the day during his heat swim.

Fox and Great Britain’s Thomas Hamer were going stroke-for-stroke before Hamer nudged Fox in the last 25m to nab bronze in 1:58.42.

While Corry said she was happy with her race, she is looking forward to the rest of her racing this week.

“I went out hard in the 200m freestyle and came out with a time I’m happy with, but what I’m really looking forward to is getting up on the blocks later in the week for the 100m backstroke, “she said.

“I’m confident in the preparation I’ve had over the last few months so I’m definitely ready to race and see how fast I can go,” added Corry.

The 2015 IPC World Championships run from July 13 to 19 at the Tollcross International Swimming Centre, Glasgow.