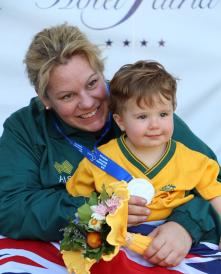 Australia’s para-shooters have collected three individual medals and four quota places at the first of three qualifier International Paralympic Committee (IPC) World Cups this year, in Osijek, Croatia, over the past week.

73-year-old veteran Libby Kosmala OAM (Keswick, SA) set the tally going with a bronze medal and a quota in 10m Air Rile Standing, ahead of fellow teammate Natalie Smith (Meadowbrook, QLD). Boasting an incredible career, Kosmala will be looking to attend her 12th Paralympic Games in Rio next year.

The next day saw London Paralympic bronze medallist Smith claim the second quota with her silver medal in Rifle 3 Position Women. Smith has been a stand-out performer, returning to the podium with great confidence after a break post London.

Victorian Luke Cain (Boneo, VIC) secured the next quota, with his fourth place finish in Air Rifle Standing Mixed, having missed out on the bronze medal by a mere 0.1 of a point.

Rounding off the four quota places won at this World Cup was Western Australian Anton Zappelli’s (Willagee) bronze medal in Air Rifle Prone Mixed. Zappelli, a relatively new athlete in this sport, was delighted to have taken his career’s first World Cup medal. A multi-talented man, Zappelli is also known for having spent five years touring with Australian folk rock band The Waifs as a roadie.

To date, the team has already secured six Rio quotas, with two more qualifier IPC World Cups to go, including one on home soil in Sydney this September.

“The team has been excellent and clearly making great progress at each international event that matters. We have earned three medals and four quotas at this World Cup, which takes our total tally of quotas to six,” Sipek said.

“This is an excellent achievement and shows the depth of our para athletes, who will be very strong competitors at the Rio Games next year.

“Everyone’s performances have been good, and we can only look forward to even better international results at the next home event in September.”

The Australian team will return home this week.