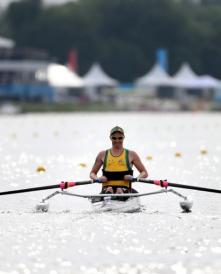 The current Para-Rowing World Champion in the Arms and Shoulders Men’s Single Scull, Horrie, cruised to victory in his A-Final on Saturday evening with a time of 4:41:74, followed by Russia Alexey Chuvashev and Great Britain’s Tom Aggar.

After the 1000m race, Horrie said: “I raced in the toughest conditions in years and it was incredible to see the times we all did, which is great for the sport and the category. It is an honour to win this second World Rowing Cup.

“It’s good opportunity to see what level I am at and to target my training. I head back to Australia this week to continue. Rio is still 12 months away and every single person will be training as hard as me so I’m sure the times will be much faster come the World Rowing Championships and Paralympic qualification in September.”

Team-mates and current Para-Rowing World Champions, Ross and Bellis, continued their winning ways as they claimed victory in the Trunk and Arms Mixed Double Scull. In the first 500m there was little between the crews competing but by the halfway point the Australians had a lead over Brazil, France and Ukraine and ultimately pulled away and proved their World Championships status to cross the line first.

Post-race, Ross said: “The conditions were the most challenging we’ve had in a while. We tried to stay relaxed and not let it bother us. It was a fabulous race by all the crews.

“Races like these are all great preparation to see where we are ahead of Paralympic qualification and hopefully Rio de Janeiro next year.”