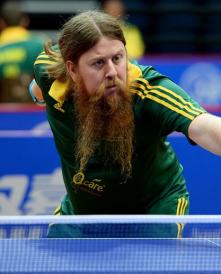 An election was held at the Regional Championships in Bendigo, this resulted in a draw between New Zealand’s James Goulding and Australia’s Trevor Hirth.

Both athletes sent their resumes to the Para Table Tennis players Committee whom made a decision based on these applications. A successful Trevor Hirth was nominated the final winner.