Steelers to fight for pride in tournament clincher 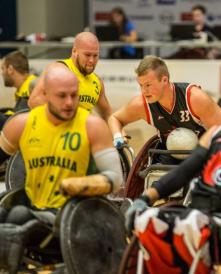 A battle of the world’s top two wheelchair rugby teams will ensue when Australia and Canada fight to win the deciding match of their five-game series tomorrow on home soil in Melbourne.

Having gone into the fourth game with confidence after posting a 59-52 victory against the world number two team earlier in the day, the Steelers failed to keep up momentum, finishing the day with a 49-50 defeat.

Despite the loss, Australian Head Coach Brad Dubberley said the neck-and-neck nature of the second and third quarters of the game emphasises how well the team is adjusting to the international competition and believes the deciding game still belongs to the Steelers.

“We were down by six goals after the first quarter of the game, and we had to expect a rebound from them (Canada) after our win this morning, but what’s important is that we did extremely well to make a comeback.”

“Canada are probably a bit more polished than us right now, yet we still managed to close the gap. They’ve got their qualifiers coming up in six weeks, and we’ve got our guys, some of who haven’t played together for 10 months. While we lost this game by 1 point, we lost one of yesterday’s game by 3, so we can come out on top tomorrow.”

Although Canada kept up the lead throughout the game, Dubberley’s line up of 3.5 player Ryley Batt and 3.0 player Jayden Warn closed the gap following the first quarter, keeping Australia consistently one point behind throughout the remainder of the game.

“Throughout the week we’ve really concentrated on developing the whole team. We’re giving opportunities to new line ups and scenarios we’re not normally used to, so come Rio, we’ll be better off as a team.

“The Ryley and Jayden line up really brought us up to scratch after the first quarter. It’s a relatively new line up, but it’s been one of the standing line ups throughout the week.”

While each team member knows the fifth and final match of the series will be tough, Dubberley says the team will now look to how they can adjust to guarantee a win tomorrow, all while focusing on developing the team as a whole.

“We’ve obviously had some tight games this week and tomorrow will be no different. When you grow and improve as a team, you have to take some bumps but we’ll be better for it,” Dubberley said.

“The good thing is that after a loss, it makes you look a bit harder about things so I think we’ll get up by three or four, but we’ll see how we go.”