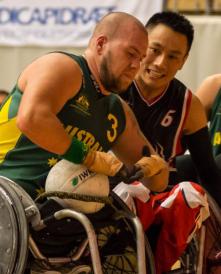 The Steelers are hungry to prove their status as the world’s number one wheelchair rugby team after a win and a loss on the first day of a friendly five-game series against world number two team Canada.

After posting a win of 56-53 in the first game, the Australians fell short by three points in the second game but Australian Head Coach Brad Dubberley believes the loss will fuel the team to victory in the remaining three games.

“It’s going to be a strong series, back and forward. We’ve got a lot of very hungry players in our camp that can’t stand losing and will not give up, so I won’t be surprised if we go on to win this,” he said.

With both games tightly contested, Dubberley said the close win and the narrow loss was also no shock and will help the Steelers prepare for the year ahead.

“Canada are a great team, they’re not number two in the world for no reason. The first game was a tough battle and it was great to get the result and as for the second game, it’s massive for us looking at the bigger picture.”

“We’ve got a lot to learn and we’re working on building the team for Rio and this has been a good insight as to what we have to do to get better,” he said.

With 16 Australian squad members having played in both games, Dubberley said the tournament has been a good opportunity for both newer and more established players to compete together ahead of the World Wheelchair Rugby Challenge in London as well as the IWRF Asia and Oceania Championships this October.

“Some of the guys haven’t played internationally since worlds, so for them it’s a bit rusty, having not played together in a tournament scenario in 10 months. There are some new line ups as well, and to see how they went against an international team, particularly Canada, the number two in the world gave us a fair bit of information as to how they handle it and how we can improve the line ups too.”

Until then, the battle between the two top teams will continue with the final game to take place this Thursday, 25th June.

“After some homework and preparation, we’ll be prepared for tomorrow. We’ll regroup and we’ll be much better and stronger for this tournament, the rest of the year and our Rio campaign from here on in.”