Pararoos power to win over Portugal 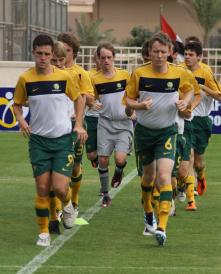 A second-half brace from James Turner has steered the Pararoos to a 2-0 win over Portugal in their opening match of the 2015 Cerebral Palsy Football World Championships.

The New South Welshman was clinical in front of goal and well supported by goalkeeper Christopher Barty and man-of-the-match Zachary Jones to ensure the Kai Lammert led side banked a valuable three points in their first Group B clash.

Australia’s Men’s Paralympic Football Team are vying for a spot at the Rio Paralympic Games by finishing among the top eight teams at the tournament in London.

With such a prize on the line both sides made a tentative start to the contest, Ben Roche going closest to breaking the dead-lock in the early stages with a free-kick from the edge of the box.

As the match progressed the two teams seemed content to throw bodies behind the ball and hit their opposition on the break, Portugal nearly catching the Aussies out with some swift ball movement midday through the first-half.

The Pararoos again looked dangerous from set-pieces when skipper David Barber had his long range effort tipped onto the bar, Barty making a fine reflex save at the other end on the cusp of half-time to ensure a goalless start to  the match.

Fans at St. George’s Park didn’t have to wait long after the break for the opening goal, Turner lashing home a long throw from Barber after it was parried in his direction by the goalkeeper.

Portugal looked dangerous for much of the second-half as they searched for an equaliser, while the Aussies were happy to sit back and absorb the pressure.

Barty made a string of crucial saves helped by Jones in the last line of defence to ensure the Pararoos maintained their advantage.

It was another long throw from Barber that helped the Pararoos seal the result in extra-time, the quick play catching out their opposition, allowing Turner to run away with the ball and thread it home to the delight of the Aussie bench.

Today was a big team effort from everyone on and off the field. Zac Jones gave an excellent debut as 6, James Turner scored 2 goals and Chris Barty’s heroics throughout the game kept Australia in the Game,” Lammert said.

“I have to give the boys a massive compliment today. We haven’t beaten this quality Portugal side in over 12 years and the boys stuck to the game plan and truly believed that today was the day we can beat them.

“We played some good Football and together with the Australian never give up attitude the boys truly deserved the win.

“The focus for the coaching staff and the players already shifted to the game against Ireland on Thursday where we expect the next tough game in our very own “group of death”.

“I believe it was a great start today and I hope the boys keep moving forward learning and adapting the new Australian way to play Football adapted by all Australian teams now.”

The Pararoos will next play Ireland on Thursday before their final group match against Russia, with the top two teams from the pool progressing to the quarter-finals and stamping their ticket to Rio.