Pararoos go down against Russia 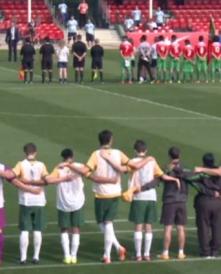 The Pararoos have ended the group stage at the 2015 Cerebral Palsy Football World Championships with a 5-0 loss to powerhouses Russia.

The European outfit dominated the contest from the opening whistle, taking the lead inside four minutes.

A powerful run through the heart of the Pararoos defence by Eduard Ramonov ended with him burying a shot past Christopher Barty in the Pararoos goal.

Moments later and it was 2-0 as Alexander Kuligin slotted home from close range after great lead-up work from Viacheslav Larionov.

The Aussies were fighting hard to get back into the match but Russia’s quality was evident.

Their skipper Lasha Murvanadze then blasted home from the edge of the area on 14 minutes to make it 3-0.

Only a couple of brilliant saves from Barty stopped Russia from going further ahead but there was nothing he could do to stop Alexey Tumakov making it 4-0 just after the break.

The substitute made an immediate impact, scoring with his first touch after coming on.

Another second half substitute Alexey Chesmin then added to the 2012 Paralympic Champions’ tally as his deflected effort made it 5-0.

The defeat means the Pararoos finish third in Group B and will have to await the final standings in the other groups to find out who they will play as they battle it out for positions 9-16 at the tournament.

Russia move on to the quarter-finals as winners of Group A, scoring an impressive 21 goals in their three group matches.