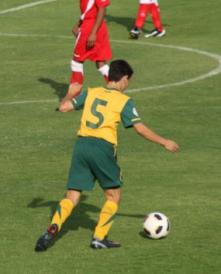 The Pararoos, Australia’s Men’s Paralympic Football Team, start their long road to the Rio Paralympic Games later this month when they take part in the 2015 Cerebral Palsy Football World Championships in London from 13-28 June.

Pararoos Head Coach, Kai Lammert, today named a squad of 14 men who will not only represent Australia at the World Championships but act as true flag bearers for athletes with Cerebral Palsy, Acquired Brain Injury or symptoms resulting from stroke.

The Pararoos transcend the football pitch as the team is vital to all Australians with a disability, providing an inspiring pathway for those who deserve the same opportunity as our able-bodied athletes.

Led by Captain David Barber, the Pararoos need to reach the Top Eight at the World Championships to qualify for the 2016 Rio Paralympic Games but for this team, having the opportunity to pull on the green and gold jersey and represent their country on the pitch means everything.

“Being part of the Pararoos is a tremendous honour and privilege,” said the 36-year-old Queenslander David Barber, who has played more than 60 matches for Australia. “Leading by example and laying the platform for players to aspire to for generations to come are elements that I take incredible pride in.

“I look forward to flying the flag for years to come.”

The Pararoos suffered a setback in 2014 after the withdrawal of Government funding threatened the squad’s progress towards the 2016 Rio Paralympic Games and without funding they will eventually be forced from the field entirely.

The Pararoos have now established a partnership with the Australian Sports Foundation to raise money through tax deductible donations to help ensure they remain on the pitch.

Donating to the Pararoos will not only help get the team to Rio, but it will also encourage many more aspiring disabled footballers to continue to strive for their dream. Every dollar raised through the Australian Sports Foundation will go directly to the Pararoos and donations over $2 is tax deductible.

Donations can be made by logging onto https://asf.org.au/project/go-pararoos

Socceroo legend Mark Bresciano has thrown his support behind the Pararoos, asking Australians to donate to ensure the program continues.

“I have always believed that football is the one and only world game. It should be enjoyed by everyone, regardless of race, gender or physical ability,” Bresciano said.

“In Australia the Pararoos have been our national football team for athletes with cerebral palsy, acquired brain injury or symptoms resulting from stroke. They are an impressive unit of inspiring athletes who are currently ranked 12th in the world.

“Without funding the Pararoos will be unable to continue their program and Aussie footballers with a disability will be forced to give up the sport they love and give up their sporting dreams.

The Pararoos squad for the 2015 Cerebral Palsy Football World Championships is: