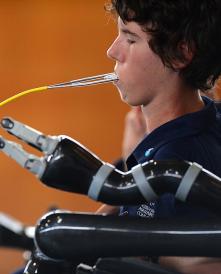 Australia will continue in its quest to qualify boccia athletes for the Rio 2016 Paralympic Games when it sends a team of emerging athletes to compete at the Asia/Oceania Teams and Pairs Championships in Hong Kong this week.

Competing in what will be Australia’s first international sanctioned tournament in the pairs discipline since 2013, will be three BC3 players including team captain Daniel Michel, Spencer Cotie and Cally Simpson.

Naming Michel and Cotie as the starting pair for the tournament, Head Coach Peter King said his selection has been strategic in both developing the Australian squad to become strong contenders in pairs for Tokyo 2020 and to increase Australia’s world ranking in the lead up to Rio.

“With the rules of the sport stipulating that a cerebral palsy athlete must make up one half of a pair, it’s great to have Spencer as real talent on the squad. We haven’t had this opportunity in nearly two years since the Asian and Oceanian Championships in Sydney,” King said.

“Although this is pairs, one of our strongest chances of qualifying for Rio lays with Dan Michel playing individually. If he and Spencer do well together, it will boost Australia’s world ranking and move us closer to qualifying for the Singles Championships next year.”

The Asia/Oceania Teams & Pairs Championships will see ten countries compete, and as a key qualifying tournament for Rio 2016, the winning country will secure automatic qualification.

As the region boasts some of the world’s strongest countries in the uniquely Paralympic sport, King believes the competition will be a challenging for the team, but he remains hopefully for place in the top four.

“Korea are proving to be the international heavy weights, they have an outstanding chance of winning. A top four finish will improve our chances for Rio significantly and I will be confident of our chances for future Games in pairs,” he said.

Competing in individual and pairs since 2011, 19-year-old Michel will be the oldest of the duo however, as a player in the squad with significance, King is confident in his success.

“Dan is the player in the squad who has has progressed most significantly since the 2013 Asian and Oceanian Championships.”

“He has had a fair amount of exposure but it will be good for him to get more travel and international game experience under his belt and lead a team for the first time.”

In what will be a test of leadership and skill for the NSW athlete, Michel will also use the tournament to prepare him for the international competition to come when he competes individually at the Boccia Open in Poland next week alongside Australian BC2 athlete Jason Mayweather.

Although 16-year-old Cotie made his debut for Australia last year, having paired with Michel previously at the 2014 Hong Kong Open, he has only come of age to play at sanctioned events as of January.

“It’s a big ask for Spencer to play at international level, both as an athlete that is part of our ‘Targeting Tokyo’ squad and as a 16-year-old who is used to spending his days at school,” King said.

“Last year in Hong Kong, Spencer displayed enormous calmness and determination, mainly credited to the great support of his parents. I do believe Dan’s calm and strategic manner will serve him well.”

“Spencer and Dan have been training consistently twice a week in pairs since January, both are very well prepared and I’m looking forward to seeing the results.”

The Asia/Oceania Teams and Pairs Championships will be taking place in Hong Kong from 10-14 June.