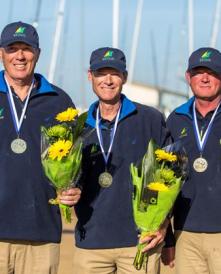 Australian Sailing Team’s sailors had a strong fourth and penultimate day of the ISAF Sailing World Cup in Weymouth and Portland (10-14 June) with a total of nine teams qualifying for Sunday’s final top ten-medal races in seven classes. Four teams sit in the top three medal positions ahead of the final double points race in each class.

Australia’s Sonar Team of Paralympians Colin Harrison (WA), Jonathan Harris (NSW) and Russell Boaden (WA) came to Weymouth on the back of winning the silver medal at the ISAF Sailing World Cup in Hyères at the end of April and the gold at the Delta Lloyd Regatta last week.

And they continued their winning streak in the six-boat Sonar fleet at Weymouth and Portland by winning the last four of a total of six races.

“It was very tough out there today with lot of wind shifts and pressure changes with the wind coming around Portland Island. Challenging but satisfying when you get away with a win so we are very happy,” Colin Harrison said after the race.

“It was our first time back here since 2012 and it brings back memories, some of which are not great. But it’s been good to complete this regatta with a win and when we come back here next there will be good memories. Since 2012 we’ve reformed the team and have Rusty (Russell Boaden) back on the team, and he has brought a lot of experience to the front of the boat. We’ve been doing very well with our results and have been on the podium at every regatta since the 2012 Paralympics. So we’re really gelling well as a team and getting the results.”

And about the plans ahead he added: “We are all going back home now and the boat goes into a container to Rio. We’ll get to sail on the waters there in September and are looking forward to the experience, which will be our first introduction to Rio.”