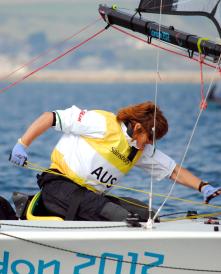 Australian Sailing’s athletes have won six medals at 2015 Delta Lloyd Regatta for Olympic and Paralympic classes which wrapped up on Saturday in Medemblik, The Netherlands (26-30 May). After the final day in strong breeze, Australia topped the medal ranks together with host country Netherlands with six medals (two gold, two silver, two bronze).

Points were tight in the Sonar class for Colin Harrison (WA), Russell Boaden (WA) and Jonathan Harris (NSW) all week. The triumvirate won both races on day one, before slipping to second overall in the 12-boat fleet. They went into the final race day ranked second behind the French team and finished the regatta with a bang by winning the last two races and taking home the overall win.

“It was an important event for us, because all countries were well represented across all three classes, so it’s been good and tough competition. All the top teams were here,” Colin Harrison said about the event.

“It’s been a cold and windy week, very challenging and shifty, but we’ve enjoyed the challenge and the team has worked incredibly well together and we are stoked about the result.”

Two-Person Keelboat – SKUD-18
It was the first European regatta this year for 2012 Paralympic gold medallists Daniel Fitzgibbon (NSW) and Liesl Tesch (NSW) who started the event out in second behind archrivals Britain. But with three race wins over the last two days they moved into the lead on the penultimate day of racing. Racing was cancelled for the Skud-18 on the final day due to the rough conditions, which meant the regatta win for the pair:

“It was a great experience to come back from behind but quite disappointing that we didn’t get to race on the last day”, Liesl Tesch said.

“It’s been a really tough regatta and it’s been a lot windier than we thought it was going to be. It’s not really what we wanted to be testing out here, but it shows our strengths and coming back from behind is quite satisfying.”

“This win is a really good psychological advantage for us going into Rio and it gives us a good indication of what we need to work on at home and in preparation for the next stage of regattas including the World Championships at the end of the year in Melbourne.”

Delta Lloyd Regatta marks the third regatta win in a row after the pair won the World Cups in Melbourne in December and in Miami at the end of January and shows they are on track in their Rio 2016 preparations.

“It’s been a really important regatta for us in the 2.4mR – almost like a World Championship. Every good disabled 2.4mR sailor in the World was here, so it’s been good for me to see how I go against the best in the World,” Matt Bugg explained.

“It’s been a tough regatta for me with a lot of wind and I had not done much racing recently in a strong breeze so I learnt a few tough lessons. But by the end of the week I had my speed up and was sailing quite well.”

The 2015 Delta Lloyd Regatta proved a welcome warm-up and training event ahead of the next World Cup with a tough, windy week for the 707 teams from 74 nations. The shifty, gusty breeze and short, sharp, unsympathetic chop of the IJselmeer made it challenging regatta. Next year’s event takes place 24-28 May 2016.

The Delta Lloyd Regatta is followed by the ISAF Sailing World Cup Weymouth (8-14 June). It is the fourth ISAF Sailing World Cup of the 2015 series and will see all Australian Sailing Team and Squad Olympic contenders compete at the London 2012 venue. Several European and World Championship Regattas in the individual classes fill up a busy competition calendar for Australian Sailing up to the Rio Test event to be held at Marina de Gloria from August 12-22.