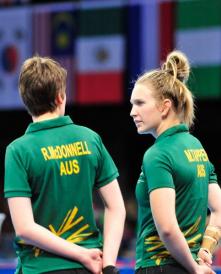 Sam von Einem is one of the newest members of the Australian Paralympic Preparation Program Squad and has made a significant impact on the international table tennis arena.

Sam has recently been confirmed as a class 11 athlete which has now made him eligible for international ranking points and the Paralympic Games.

Not only did Sam celebrate his 20th birthday in Spain he also took home a gold medal in the Men’s Class 11 Singles. Sam was up against a new  addition to the French team; CREANGE,Lucas, Edouard who had Sam at 2-1 before coming back and defeating Edouard 3-2.

Rory Carroll also had a win in his last group match against Yagiz Anil from Turkey.

Australia didn’t stop their fantastic performance with the singles matches. Melissa Tapper and her Chilean partner; Francisca del Carmen Morales Araya took home Silver. The combined duo had a great start defeating the Spanish team and combined Greek and Norwegian team both 3-0. They put up a great fight against the Russian Team in the gold medal play off but had an unfortunate end result of a 3-2 defeat.

Sam von Einem and Rory Carroll had a great team performance winning all their teams matches 3-1 against; Russia, Turkey and Germany apart from the competitions favourite; France.

Unfortunately the duo couldn’t claim Gold with an end result of a 3-2 loss. The pair won their doubles match 3-2, Sam secured one of his singles matches 3-0 and lost one 1-3, while Rory lost both his singles matches; 2-3 and 0-3.

Congratulations to Sam von Einem, Rory Carroll and Melissa Tapper who in total took home 5 medals and performed outstandingly throughout the entire tournament.