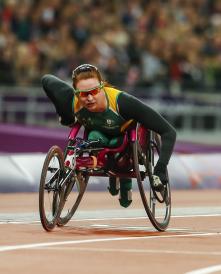 Australia’s Angie Ballard beat the women’s 400m T53 world record on Friday (29 May), the first day of the IPC Athletics Grand Prix in Nottwil, Switzerland, with a blistering time of 54.73 seconds.

The 32-year-old, who won silver in this event at London 2012, was 0.15 seconds faster than the previous record set by the USA’s Jessica Galli on her way to gold, six years ago at the Beijing 2008 Paralympic Games.

Ballard beat a quality field to finish ahead of the USA’s Chelsea McClammer (56.45) and teammate Madison de Rozario (57.31).

“I was hoping to do well in the series of racing we’ve got coming up but I didn’t expect that at all, I was more bothered about dealing with the wind,” said Ballard. “It was a very strong wind so it was really helpful down the back straight and down the home straight I just pushed as hard as I could.

“The 400m is my favourite race, a lot of people hate the event but it is something I have learnt to love. It has given me great confidence for the next few races.”

Friday’s competition, which was supported by IPC Athletics partner Allianz, was dominated by 400m races with multiple classes taking part.

A blistering European record by Finland’s Henry Manni (52.60) was only good enough for second place behind Tunisia’s impressive world and Paralympic champion Walid Ktila (51.30) in the men’s T34 class.

On his home track, Swiss world champion Marcel Hug (48.24) edged out the Netherlands’ European title holder Kenny van Weeghel (48.61) in the final heat of the men’s T54 class. However, it was France’s Julien Casoli (47.76) who posted the fastest time of the day.

Racing in the penultimate heat, the 32-year-old posted the fourth fastest time of the year, a performance made even more impressive by the fact he was racing from lane one. In the same heat Russia’s Alexy Bychenok (48.16) posted the day’s second fastest time from lane eight.

The USA’s Raymond Martin (57.72), a winner of five world titles at the 2013 World Championships in Lyon, France, eased to victory in the men’s T52 class posting the fastest time of the year so far. He finished well ahead of Austria’s Thomas Geierspichler (1:03.36) in second and Thailand’s Kurattanasiri Pichaya (1:03.57) in third.

“It was a pretty good race,” said Martin. “The wind was coming into our faces in the home straight which slowed us all down a lot, but it also made for a real fast start.

“The time is a good start to the year; ideally I’d like to go under 57 seconds this year but you never know.”

Ahmad Almutairi (58.13) of Kuwait easily won the men’s T33 class with a time just outside his own world record.

In one of her first track outings of the year, Tatyana McFadden (53.25) was in sensational form winning the women’s T54 with the fastest time of the year so far. More than three seconds behind her in second place was Japan’s Tsuchida Wakako (56.60) whilst the Netherlands’ Margriet van den Broek (57.73) was third.

Great Britain’s Hannah Cockroft continued her dominance of the women’s T34 class easing to victory with a time of 1:01.45. Well behind her in second was the Netherlands’ Desiree Vranken (1:05.13) and Australia’s Rosemary Little (1:06.43).

Competition continues at the IPC Athletics Grand Prix in Nottwil through to Sunday (31 May).