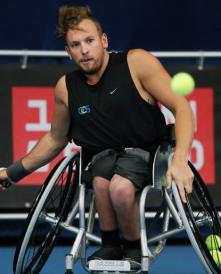 Dylan Alcott has won the BNP Paribas Open de France singles titles as the fourth Super Series event on the UNIQLO Wheelchair Tennis Tour drew to a close on Sunday in Antony, Paris.

Alcott could potentially move to the top of the quad singles rankings for the first time on Monday after reversing the result of the 2014 final in Antony to defeat top seed David Wagner 61 62.

The 24-year-old Australian Open champion has now won three of the first four Super Series quad singles titles of 2015 and moves to within won match of levelling his and Wagner’s career head-to-head after winning all five of their matches this season. Alcott ended the tournament with both the quad singles and doubles title after joining forces with Lucas Sithole to win the quad doubles.