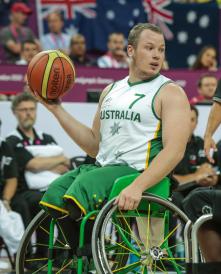 A squad of 20 players has been named for the Australian Rollers in preparation for the IBWF AOZ qualification tournament in Japan from October 7-18.

Of the 12 Asia /Oceania teams competing in the tournament, the top three will book themselves a spot for Rio next year.

Head coach Ben Ettridge is excited about the group he has assembled which includes 14 victorious players from the last two IWBF World Wheelchair Basketball Championships in 2010 and 2014 as well as six Paralympic gold medallists from 2008.

“I’m pretty stoked to be selecting from a group with this level of talent,” he said. “To have 14 World Champions is great.”

The inclusion of Eveson, Hartness and Norris puts to rest any concerns raised by Wheelchair Sport WA over the players having risked national selection by not electing to play in this year’s NWBL season.

Last year, Stibners was not part of the team but the other five went on to defend their title at the 2014 IWBF World Championships. They were joined by Josh Allison, Jannik Blair, Tom O’Neill-Thorne, Luke Pople, Nick Taylor, Adam Deans and Bill Latham.

“Having guys who have been on the big stage is massive, especially when you have a target on your back like we do now,” Ettridge said.

“That experience goes a long way but we’ve also put the time and effort into the younger guys coming through to keep the squad right where we want it.”

Rounding out the squad will be the NWBL experienced Damon Fent, Michael D’Amelio and Shawn Russell from Victoria, Michael Auprince from New South Wales, Matt McShane from Queensland and Sam White from South Australia.

Ettridge will utilise a training camp in Brazil for final team preparations a week before the AOZ tournament.

Looking ahead to October, he expects to face ‘the usual suspects’ in the likes of Japan, Korea, Iran and Thailand.

“There are three or four teams that could cause a bit of mischief for us but we are confident we can select a team that will qualify us for Rio,” he said.