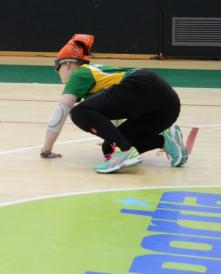 The taste of success is fresh in the mouths of the Australian women’s goalball team as it wins its fourth consecutive match at the IBSA World Games in Seoul, South Korea.

Following its victories against host nation South Korea and Germany, the Aussie Belles went head-to-head with Canada to win 4-0 and London 2012 gold medallists Japan, for a final score of 3-1.

In the game against Canada, Belles captain Meica Horsburgh lead the team all the way to success, scoring the only goal in the first half, as well as the final three goals while the team continued its strong defence.

Starting their match against Paralympic champions Japan in a similar fashion, the score again at half time was 1-0.

London 2012 Paralympian Tyan Taylor secured goals for Australia in both halves of the game, with Horsburgh again scoring the final goal.

The Aussie Belles will play their sixth and final preliminary match against Algeria on Friday, 15 May at 5.30pm AEST before the quarter finals begin.

As a key qualifying tournament for the Rio 2016 Paralympic Games, the team will need to progress through to the finals to secure automatic qualification. This will be one of their last opportunities to qualify, following their defeat at the 2014 World Championships.

The 5th IBSA World Games in Seoul, South Korea conclude on Monday, 18 May, with visually impaired athletes from 60 countries competing in the sports of Para-athletics, Para-judo, Para-powerlifting, Para-swimming, as well as the non Paralympic sports of chess, showdown and ten pin bowling.