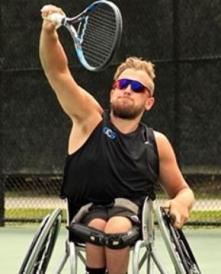 World No. 1 David Wagner will play world No. 2 Dylan Alcott in the quad singles final at the Japan Open, after top seed Wagner recovered from an indifferent first set in his semifinal against Japan’s Mitsuteru Moroishi in Iizuka.

Meanwhile, all eight seeds are through to the men’s singles quarterfinals and all four top seeds are into the women’s singles semifinals at the third Super Series tournament of 2015.

However, the unseeded Japanese player suggested an upset might be on the cards in front of his home supporters before Wagner found his form to complete a 36 61 61 victory and stay on course in his quest for an eighth Japan Open title.

In the other quad singles semifinal, Alcott ended the title defence of South Africa’s world No. 4 Lucas Sithole as the Australian second seed continued his first visit to the Japan Open with a 62 62 victory.

Wagner and Alcott will also meet in the quad doubles final as Alcott joins forces with Sithole to face the USA’s defending champions and top seeds Greg Hasterok and Wagner.