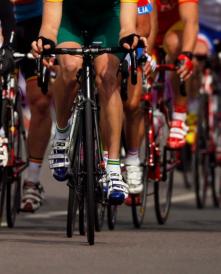 Like most Para-cycling athletes, 26-year-old Kyle Bridgwood has an inspiring story to tell.

A former private in the Army, Bridgwood was injured when hit by a car while cycling before work. Four years later and the South African-born rider is set to make his Australian team debut at the 2015 UCI Para-cycling Road World Championships.

“I was hospitalised for about three weeks with my condition labeled as a multi trauma,” said Townsville’s Bridgwood.

Despite the severity of his injuries, Bridgwood returned to cycling, representing the Australian Army and winning gold at the 2012 Warrior Games.

“Because I was in the army, they give really great support to their soldiers who are injured with rehab and access to other services, it’s really amazing what they do.

“I went over [to USA] with a lot of other Australians and I won the road race, which was really exciting because I had only just got back on the bike.

“While I was over there, someone told me I should think about getting classified and that’s how I got into Para-cycling,” explained Bridgwood who is classified as a C5 athlete.

Now Bridgwood is preparing for the biggest race of his career.

“It’s very exciting being selected for the world championships. Coming from the Army and being medically discharged now, I miss the comradery and mateship and I get that from cycling.

In addition to his Para-cycling commitments, Bridgwood is also a member of the Data#3 Symantec Racing Team, set to compete in the Subaru National Road Series event the FKG Tour of Toowoomba this Thursday.

The FKG Tour of Toowoomba will run from Thursday May 21 to Sunday May 24 with over 160 riders taking part including a team from the Philippines.

Highlights from the FKG Tour of Toowoomba will be broadcast on the Nine Network’s GEM channel on Sunday, May 31 at 12noon AEST and 11.00am AWST and on Fox Sports 3 on Tuesday June 2 at 6:00pm AEST (check local guides).