No Belle prize for Australia at the IBSA World Games 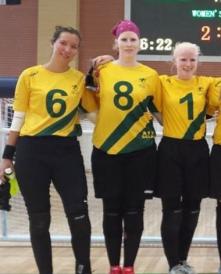 Despite the 2015 IBSA World Games being one of its most successful tournaments to date, the Australian women’s goalball team has fallen short of the top two finish needed to secure automatic qualification for the Rio 2016 Paralympic Games.

With six consecutive wins behind them during the qualifying rounds, the Aussie Belles went into the semi final clash against regional heavyweights China brimming with confidence but could not secure the result they were looking for.

Instead, the Chinese were dominant and secured a place in the gold medal match with a 6-0 over the Australians..

While a spot in the gold medal match would have confirmed qualification for the Rio 2016 Paralympic Games, the Aussie Belles held their heads high going into their final match against Canada to fight for bronze.

Having defeated Canada in the round robin stage of the tournament 4-2, the Australians endured a shaky start to the game, with Canada leading the way at half time 3-0.

Team captain Meica Horsburgh tried to lead the comeback and proved to be an asset once again, scoring the only goal for Australia in the second half of the match, but Canada resisted and went on to score two more goals to secure a 5-1 victory.

While the dream of a podium finish did not ring true for the Belles, they will now turn their attention to the final qualification opportunity for Rio 2016; the 2015 IBSA Asia Pacific Regional Championships in China this November.

In the men’s competition at the same venue, Australia finished the pool rounds with just one win and six losses from their seven matches and did not progress.