London memories calling Chaffey, Densham and McShane on the Road to Rio 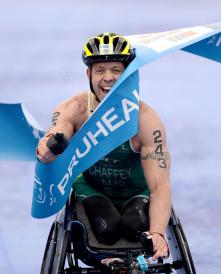 Four-time Paratriathlon world champion, Bill Chaffey and former Under 23 world champion Charlotte McShane and Olympic bronze medallist Erin Densham will return to the scene of their greatest triumphs when the ITU World Triathlon Series stops in London this weekend.

The trio will use this weekend’s Sprint Distance event in London in the lead up to the Rio Test events in August and the ITU World Championships in Chicago in September.

For Chaffey, his London success came 12 months after Densham when he surged home to win his fourth world title with a never-say-die final cycle leg to put his name in the ITU record books.

He will be the lone Australian in Saturday’s Paratriathlon event as the sport gathers momentum in the exciting countdown to its 2016 debut.

Densham, McShane and Chaffey and their respective squads have all settled into their respective European training bases in recent weeks as they acclimatise to the European and North American summer racing schedule – Densham and McShane have been in Vitoria-Basque, Spain and Chaffey in the French Alps region of Aix Les Bains.

It will be Chaffey’s next preparation race before the Paralympic qualifying period kicks in and he’ll be looking to improve on his previous outing ion Madrid, which saw him finish second to the flying Dutchman Jetze Plat – the handbiker-turned-paratriathlete they call “Superman.”

Chaffey has been with the QAS Moss Squad, including Jackson, Backhouse and Dan Wilson under head coach Stephen Moss for two weeks.

He will race Saturday evening AEST – kicking off at 6:30pm while the Elites will race on Sunday night AEST – the men from Midnight, followed by the women from 1:45am. Both events will be broadcast via the ITU LIVE STREAM.

Triathlon Australia’s National Performance Director, Bernard Savage has been in Europe and will head to London for the weekend’s racing.

“I know Bill is looking to put in an improved performance from Madrid and being back in London will be a big kick for him – his performance in 2013 was amazing.”