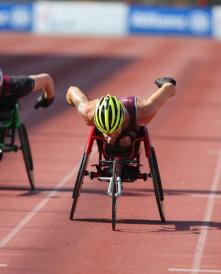 Paralympic track and field stars from around the world will descend on Nottwil, Switzerland, this week (29-31 May) for the next in the series of IPC Athletics Grand Prix taking place throughout the year.

The Para-athletics event is widely regarded as one of the most competitive wheelchair racing meetings in the world, with 350 athletes from 39 countries set to take part.

Last year saw 11 world records fall – this time around the event at Sport Arena Nottwil – supported by international partner Allianz – will provide many of the world’s best with a vital opportunity to test themselves against their chief rivals in a World Championships year.

Here are just some of the key events to look out for:

A world class line up which includes all eight finalists from the 2013 IPC Athletics World Championships. Tunisia’s Paralympic and world champion Walid Ktila is the man to beat – hoping to do just that are the likes of Australia’s Oceanic record holder Rheed McCracken, Switzerland’s European record holder Bojan Mitic, and the Asian record holder Mohamed Hammadi of the UAE.

A thrilling battle is on the cards as long-standing track rivals Leo-Pekka Tahti and Kenny van Weeghel go head-to-head once more. The Dutchman has more recently come out on top over 200m, winning world and European gold ahead of Tahti, who holds the Paralympic, world and European 100m T54 titles. This year the Finn hopes to dominate both distances – starting in Nottwil.

All three medallists from the 2013 World Championships are in Nottwil this weekend. Gold medallist from the USA Josh George is joined on the start line by Canada’s Brent Lakatos, who alongside 800m T53 silver, won four global golds in Lyon. Frenchman Pierre Fairbank took the third spot on the podium and should not be dismissed. Watch out too for Australia’s Richard Colman.

Home favourite and multiple world and European champion Marcel Hug takes on Great Britain’s four-time Paralympic champion David Weir in what is sure to be a thrilling battle. The pair raced over one mile in the streets of London, Great Britain, last Sunday (24 May) and it was Weir who came out on top clocking a superb 3:03, just outside the sub-three minute barrier he had been targeting.

Syria’s world shot put gold medallist Mohamad Mohamad has been a regular on the Grand Prix circuit so far this year, with tremendous success. The 31-year-old set a new world record in the javelin F57 with an impressive 44.00m at the season opener in Dubai, UAE, in February – then last month in Sao Paulo, Brazil, he threw 13.60m in the shot put to top the 2015 world rankings.

Dutch sprint star Marlou van Rhijn looks to be in the form of her life, breaking her own T43 world records in the 100m and 200m already this year. The 23-year-old set a new 400m T43 world record at the Nottwil track 12 months ago and will surely provide plenty of excitement on the track if her recent performances are anything to go by.

Great Britain’s reigning European 800m T34 champion Hannah Cockroft holds the T34 world record in this distance – as well as in the 100m, 200m and 400m T34. The 22-year-old dominates the shorter sprints in her class and now she is out to prove she is the queen of middle distance too. Australia’s Rosemary Little tops the 2015 global rankings and also has a strong sprint finish – she will be hoping to land Cockroft with her first defeat in seven years.

Five of the eight finalists from the 2013 World Championships line up in Nottwil so expect an entertaining race here. Australian duo Angela Ballard and Madison de Rozario won silver and bronze respectively at Lyon 2013, whilst the USA’s Shirley Reilly won marathon gold, 5,000m silver and 1,500m bronze at London 2012. Another American to watch out for is Amanda McGrory, who won the 800m world title in 2006 and again in 2011 – and more recently clinched bronze at the World Marathon Championships in London last month.

One name everyone will be sure to be talking about in this race is the USA’s multiple world and Paralympic champion Tatyana McFadden. The 26-year-old made history in 2013 when she became the first woman to win six world titles at one World Championships – including the 1,500m. But the rest of the field are world class too, with the holders of the European, Asian and Oceanian records all present.

Japan’s Wakako Tsuchida finished second behind McFadden in the 1,500m in Lyon, while home favourite and European champion Manuela Schaer will be out to impress the local crowds.

Italy’s Martina Caironi, Germany’s Vanessa Low and the Netherlands’ Iris Pruysen all line up in what is sure to be a nail-biting encounter. Pruysen is the reigning T44 world champion; Caironi holds the T42 world title; Low is the European champion who set a new T42 world record of 4.60m at the Grand Prix Final in Birmingham, Great Britain, last August. Caironi meanwhile hit the headlines earlier this month when she equalled that record at a meeting in Barcelona, Spain.