Golden rain for Para-triathletes in Yokohama 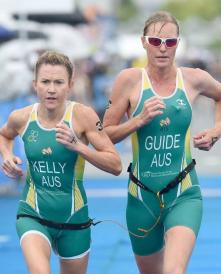 Canberra’s Katie Kelly took a step closer to her dream of competing in next year’s Paralympics in Rio de Janeiro today with a gold medal performance at the Yokohama ITU World Paratriathlon Event guided by World Champion and Olympic silver medallist Michellie Jones.

In just her second World Paratriathlon Event (WPE) and the pair’s first time racing together it could well set Australia up for another exciting era with Kate Doughty also taking gold in the PT4, Emily Tapp gold in the PT1category and Justin Godfrey and Matt Brumby both winning bronze in the PT3 and PT1 divisions respectively.

Kelly was born with Usher Syndrome, a rare deaf and blind degenerative condition and was only recently formally classified as a PT5 athlete after her eyesight had deteriorated to a legally blind status.

hat has not slowed down this amazing 40-year-old, in fact it has urged her on to even greater achievements.

It was a dominating performance from Kelly and Jones, who led from the gun, made even more impressive given the wet and difficult conditions over the sprint distance course (750m swim, 20km cycle and 5km run).

Despite all the challenges that were thrown at them today Kelly and Jones not only handled them, but also thrived in the conditions.

“It was probably more challenging for MJ on the bike but once we did a couple of laps and knew the course it was pretty good,” said Kelly.

“This is the first time we raced together, that’s always something different but in terms of swimming in the harbor, the ride and the run, great crowd support and really well organized event, we had a lot of fun.

But champions always rise to the top and Jones did that today for her partner although it wasn’t all smooth sailing.

“For the first time riding the tandem in a race, it was good. For me the technical aspect was perfect because it taught me a lot really quickly,” said Jones, a reigning ITU World Age Group Champion who was happy to step up when Triathlon Australia’s Paratriathlon head coach Corey Bacon asked her to guide Kelly.

“Our plan was to take it a little bit easy on the first lap and then give it a bit more of a go. As long as Katie is happy, I’m happy.

“You just back off a little bit on the course, we hit the straights as hard as we could. We had one scary moment and I’m like whoa, pilot error.

“The more technical it is the quicker I am going to learn, I was happy it was quite technical and wet so you throw everything at us right now and we’re good.

“To be asked to be a guide certainly motivates me after so many years in the sport, it’s nice to do something completely different.

“Today I actually enjoyed it and it was very different from racing as an individual, but I hope Katie picks me as a guide.”

The eyes of the world will be following them as they continue to move towards a very exciting Road to Rio. It will also see Kelly move up the world rankings from her current position of 13 and closer to a start at the World Championships in Chicago later in the year.

“I think it’s just fantastic that Paratriathlon is making it to Rio, but then you have people like Michellie who have done so much in the sport as an elite athlete and it’s a real opportunity for all athletes out there to give back a little, “said Kelly.

“We don’t take it for granted, we’re so grateful for the opportunity and overall it’s just fantastic for the sport.”

The current Australian Championship, Kate is going from strength to strength.

This was Kate’s first race overseas and made it a memorable one with an impressive performance leading at every changeover.

She didn’t let the magnitude of the moment overwhelm her and also handled the conditions exceptionally well.

“The race felt really good, enjoyed the wet, fantastic to win at my first overseas race, in a PB I think,” said Doughty.

“I was so honoured and excited at the start, I was the first athlete introduced and therefore the first to walk down to the pontoon.”

Doughty only stepped into the sport this year after a successful international Equestrian career. It looks like the decision to sell her horse and buy a bike is paying off, as the daughter of a Melbourne bookmaker, it seems be a good bet.

Queensland wheelchair athlete Emily Tapp, the only one in her PT1 category as it’s not included in the Rio program, produced a solid race and will benefit from the experience.

Godfrey had surgery back in November to improve his stump to better support the demands elite Paratriathlon racing.

He was second out of the water and third into T2 and hung onto that position for a bronze today.

Glen Jarvis just missed a podium but grabbed fourth in a hard fought race, he put himself in a good position all day. He matched his performance last year when he finished fourth.

Triathlon Australia’s Paralympic Program Manager, Kathryn Perriac said:
“I am delighted with the performances of all athletes today. Despite rain and the challenge of their first “big time” international race for most, all athletes have risen to the opportunity.

“Three wins to our women, all of whom are less than one year In Paratriathlon. Two bronzes and a 4th for the men.

“The competition here is mostly new athletes and it was the Australians who came through best prepared.

“This is in great part the result of the quality coaches we have in Corey Bacon (the three girls) and Fab Andreoni.

“I also want to acknowledge the privilege of having one of the greatest triathletes ever in Michellie Jones join our team.

“As well as the physical talent and technical experience she brings to Katie’s race she brings her elite professionalism and quiet confidence to all members of the team.”