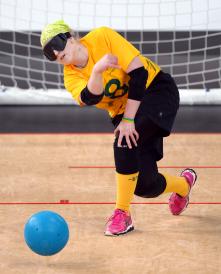 The Australian women’s goalball team is quickly proving that it has what it takes to compete at the Rio 2016 Paralympic Games, with two consecutive wins at the IBSA World Games in Seoul, Korea.

In what was their second win of the tournament, the Aussie Belles triumphantly won against host nation South Korea 2-1, with London 2012 Paralympians Meica Horsburgh and Tyan Taylor scoring both goals in the first half of the game.

Following their victory, the team also put Germany through its paces, claiming a 3-0 win. Captain of the women’s side Meica Horsburgh, who is also the longest standing member of the team, proved to be an asset once again, scoring all three goals of the match.

While the Belles are still in the preliminary matches of the competition, the double wins will put them in a very good position to make the quarter finals of the tournament.

The Australian women’s team will take on Canada at 4pm AEST on Thursday, 14 May. Should the Belles keep up their momentum and progress through to the finals, they will secure automatic qualification for the Rio 2016 Paralympic Games.

In the men’s division, the Aussie Bouncers entered their fourth match as the underdogs having lost three consecutive games, but came up strong against Venezuela to secure their first win of the tournament 15-8.

After a shaky start which saw Venezuela score the opening goal of the match, Ben Rowe scored two consecutive goals, giving them the upper hand before half time.

The leading goal scorer of the game was Australia’s Ben MacFie, who secured 10 goals for the game.

Following the tournament, both teams will have one more chance to qualify for Rio 2016 when they compete at the 2015 IBSA Asia Pacific Regional Championships in China this November.

The 5th IBSA World Games in Seoul, South Korea will conclude on May 18th.