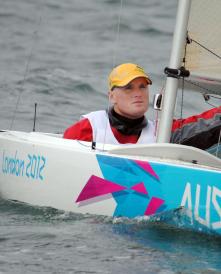 The third leg of the 2015 EUROSAF Champions Sailing Cup, the Delta Lloyd Regatta, kicks-off tonight in Medemblik, the Netherlands.

Over 700 boats and competitors from 74 different nationalities will be competing in the ten Olympic and three Paralympic classes over the next five days (26-30 May). Racing is scheduled to start from 10:00 local time (18:00 AEST).

The 31st edition of this popular sailing event, which is the biggest sailing event in the Netherlands, will see Australian Sailing’s full Paralympic Team (AST) and Squad (ASS) compete in the three Paralympic classes of the Sonar, Skud 18 and 2.4MR, which have attracted record numbers of entries.

Paralympic Gold medallists Daniel Fitzgibbon (NSW) and Liesl Tesch (NSW), winners of the World Cups in Melbourne and Miami, will be looking for another podium finish at their first European regatta of the year. They will be racing in a fleet of eighteen, including ASS team of Ame Barnbrook (NSW) and Brett Pearce (NSW), who kick-off their 2015 international season in Medemblik.

Australia’s Sonar crew of Paralympians Colin Harrison (WA), Russell Boaden (WA) and Jonathan Harris (NSW) started their European season with a silver medal at the ISAF Sailing World Cup in Hyères and have a strong fleet of twelve boats, including all Hyères medallists, to compete against.

Matt Bugg (TAS) had his most successful European regatta in Hyères to date when he won a silver medal in the 2.4mR and will be looking to build on this in a big fleet of 32 boats, including ASS’s Neil Patterson (TAS).