Australia edges closer to Rio at the IBSA World Games 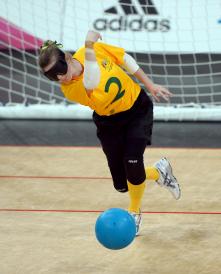 Australia has come one step closer to qualifying a goalball team for the Rio 2016 Paralympic Games, with the Australian women’s side defeating Sweden on day three of the IBSA World Games in Seoul, South Korea.

Following their less than perfect start in their opening match against Great Britain, the Aussie Belles fine-tuned their skills as they took on London 2012 bronze medallists Sweden to win 6-1.

Leading at half time, the women’s team united to score a further four points to secure their victory.

In other results from the IBSA World Games, the Australian men’s team, the Aussie Bouncers lost their third consecutive game to China, with a final score of 11-1.

With a half time score of 6-1 proving too hard to beat, the team failed to score in the second half and weren’t able to defend China’s final five goals.

As a qualifying event for the Paralympic Games, the IBSA World Games provide both Australian teams with one of their final opportunities to compete at Rio 2016.

The Aussie Bouncers will need to medal, and the women’s team will need a top two placement to secure automatic qualification for the Paralympic Games. Both teams will have their final opportunity to qualify at the 2015 IBSA Asia Pacific Regional Championships in China this November.

Tomorrow will see the women’s team play two games, with their first against South Korea and their second against Germany, and the Aussie Bouncers will come head-to-head with Canada.

The 5th IBSA World Games in Seoul, South Korea conclude on May 18th 2015 and will see visually impaired athletes from 60 countries compete in the sports of Para-athletics, Para-judo, Para-powerlifting, Para-swimming, as well as the non Paralympic sports of chess, showdown and ten pin bowling.