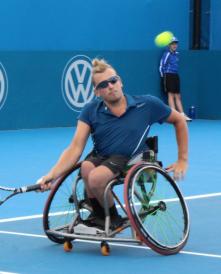 Dylan Alcott moved ever closer to David Wagner at the top of the quad singles world rankings when Australia’s world No. 2 clinched the third Super Series quad singles title of his career on the penultimate day of the Japan Open, part of the UNIQLO Wheelchair Tennis Tour, in Iizuka.

Second seed Alcott , beaten in straight sets by Wagner in the quad singles semifinal the two contested at the 2014 Japan Open, avenged that loss when he wrapped up a 62 26 63 victory to add to his 2014 British Open and 2015 Sydney International Open titles.  He ends the Japan Open with both the quad singles and doubles titles after partnering Lucas Sithole to win the doubles.