Back with a bang, Smith claims Gold in Poland 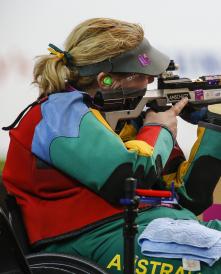 A champion on and off the field, Smith has returned to Shooting, after two seasons, not only making two finals at the World Cup, but also beating the best competitor in the field, Slovakia’s 32-year-old Paralympic gold medallist Veronica Vadivocova.

Smith secured the gold medal by a margin of 1.5 points, just 0.6 of a point behind the World Record set by Vadivocova.

Smith had also made the 10m Air Rifle Mixed prone final match the day before, after shooting a personal best score of 631.1, in a relatively new event for her.

Smith has been training incredibly hard, after a tough year, following the birth of her son, multiple major surgeries to fix injuries, and a gruelling four-month stay in hospital.

Smith spoke with Shooting Australia following the medal presentation, describing her excitement at coming back strong after a long break.

“I was happy to have made the prone final on Friday. It gave me the confidence I needed from the break I have had from Shooting,” she said.

“I was tense in the Air Standing final, but kept telling myself to hold it together and keep shooting good shots. I didn’t let the screen distract me, so I just kept going until the end. That’s when I turned and looked at the screen and almost burst into tears.”

“This is a huge win. To come back after two seasons and beat the very best is incredible. Natalie is one of those very rare people – she has the mind of a champion. She doesn’t care who the competitor is because she is unafraid. She will beat anybody.”

“Nat beat Vadivocova at the London Games and she will beat her again at the Rio Games,” Sipek said confidently.

Undoubtedly back with a passion, Smith is certainly making tracks to be on the road to Rio.

The Australian Paralympic team is still recovering from the personal loss of a much-loved team-mate. This would have been an event that the late Ashley Adams (Blackall, QLD) would have competed in. Adams tragically lost his life in a quad-bike accident on his farm last month.