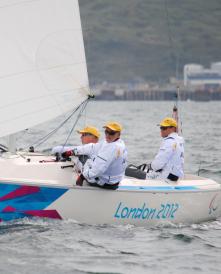 The Australian Sailing Team will compete in full force at the ISAF Sailing World Cup Hyères, which gets underway in France on Wednesday, 22 April 2015 (22-26 April 2016).

This Olympic and Paralympic class regatta is the first major event on the road to Rio 2016 selection and the third of five 2015 ISAF Sailing World Cup series events that lead up to the ISAF Sailing World Cup Final in Abu Dhabi later this year. Top results at the key international regattas are required to be named in the Australian Sailing Team and to be nominated for the 2016 Olympic and Paralympic teams.

Four AST and one ASS Paralympic class athlete will be competing amongst a total 39 Paralympic sailors in 25 boats in France.

Racing commences on Wednesday, 22 April with a four-day series building up to the Medal Races on Sunday 26 April.

In the Paralympic boat classes, Australia has two boats in the 18-boat 2.4mR fleet with London Olympian Matt Bugg (TAS) as well as Australian Sailing Squad’s Neil Patterson (TAS) competing in Hyères for the first time:

“It’s my first time in Hyères and so far I love it here,” Matt Bugg said. “We’ve got a really good fleet and all the best guys in the world are here racing. It’s really good for me, because it’s a similar size fleet to what the Paralympics will be next year and with the same sailors. So it’s a good quality fleet and we should see some good racing.”

Paralympic gold medallist and 2014 World Champions Daniel Fitzgibbon (NSW) and Liesl Tesch (NSW) will kick-off their European season at Delta Lloyd Regatta, Netherlands at the end of May.