A golden glow for the Aussies in Berlin 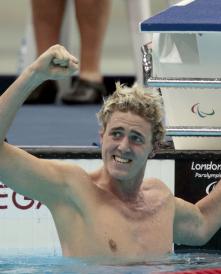 The Aussies have left Berlin with a golden glow after the final night of racing taking home a staggering 26 medals with 11 gold, eight world records, 28 personal best swims and 55 season best performances.

To finish off the dazzling four day performance Queenslander Daniel Fox hit the pool for the 100m freestyle heat swim to break his own world record time in 53:53. Heading into the final as the top contender Fox proved too fast for the field shaving three one hundredths of a second off his earlier world record winning gold in 53.50.

Ashleigh Cockburn, Maddison Elliott, Ahmed Kelly and Reagan Wickens came together as a team in the 4x50m mixed relay to win the eleventh gold medal for the meet.

After claiming gold in 100m backstroke Michael Anderson took to the blocks for the 50m backstroke final up against rivalry and Greek Paralympic champion Aristeidis Makrodimitris. Anderson finished strong in an Oceania record time of 28.51 to win the silver just behind Makrodimitris.

Over the four days of competition the fifteen-strong team of multi-class athletes raised the bar significantly with three of the top male and female athletes of the meet going to Australians, Blake Cochrane who was placed as the number one swimmer after a record breaking swim in the 100m breaststroke earning 1032 points. Matthew Levy took out fourth place with 1016 points in the 50m breaststroke and Brenden Hall sixth with 981 points in the 800m freestyle.

With just over 11-weeks until the IPC World Championships in Glasgow the team will return home, take a week to recover from their outstanding performances then commence the preparation for Glasgow. This will include further racing opportunities in Townsville at the Grand Prix 2 on Friday 19 and Saturday 20 June before departing for the World Championships on Tuesday 30 June.