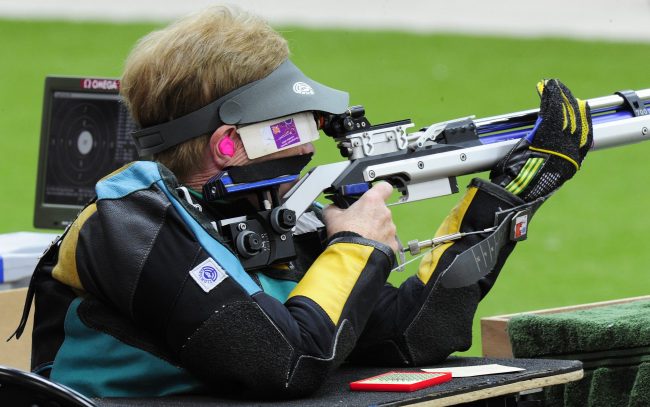 Still showing her expert prowess in the sport, the 11-time-Paralympian shot a world-class score of 411.8 during the qualification round, and cemented her strong position in the final match of the women’s 10m air rifle standing SH1, ahead of Slovakia’s world champion, European champion and Paralympic champion, Veronica Vadoviceva.

During the tough final, Kosmala maintained her dominance for the first half, after which she suffered a spasm, costing her the lead, to finish on a total of 200.7. Vadoviceva then gradually built on her advantage, and went on to win the title by five points. The bronze medal went to British athlete Lorraine Lambert.

This is a bittersweet success for the Australian team, which is mourning the loss of teammate Ashley Adams, who was tragically killed in a quad bike accident on his farm earlier this month.

The remarkable 72-year-old grandmother said she was very happy winning the silver medal and hoped there would be more to come in 2015 and 2016.

“I am well-prepared, and I was looking forward to shoot to the best of my ability,” Kosmala said.

“The most important goal for this year is to win the quota for Rio 2016 [the next Paralympic Summer Games].

“Ashley is watching over us, and certainly, when the spasm occurred, I thought of Ash, as he had to deal with spasms very often during competition.”

“Libby is a terrific athlete and an inspiration to us all. She has had a long, successful athletic career, and this win shows that she is still up there with the world’s best.”

For Head Coach Miro Sipek, Kosmala’s silver was a strong start to the season for the Australian Para-shooting team.

“I strongly believe that Ashley’s spirit will inspire our athletes to perform at their very best and win more medals for Australia. We will dedicate our medals to Ash’s memory, with the 2016 Rio Paralympic Games in our sights,” Sipek said.

This IPC World Cup marks the start of the 2014 international season, which will see World Cups also contested in July, September and November – all with quota places for Rio on offer.