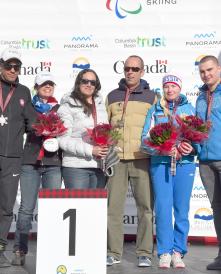 Australian vision-impaired skier Melissa Perrine has collected her second gold medal in two days by surging to victory in the women’s Super-G at the 2015 IPC Alpine Skiing World Championships in Canada.

It continued a career-best week for Perrine from Mittagong in NSW, after she broke through for her first ever world championship gold medal a day earlier in the women’s vision-impaired downhill.

“We had a few issues in training earlier this week with some worrying sections of the course, but to have been able to put them behind me and to ski the way I wanted to ski has been really pleasing.

“It’s a good feeling, especially after the disaster I had in Sochi [at the Winter Paralympics last year].”

With three events – the super-combined (Sunday), giant slalom (Monday) and slalom (Wednesday) – still to be fought out in Panorama, Perrine is already dreaming of a clean-sweep.

“To get on the podium for all five events would be amazing, but Andy and I haven’t spoken about it. We’ll just focus on each race and focus on controlling what we can control,” Perrine said.

Australian Paralympic alpine skiing coach Christian Geiger said the results were an overdue reward for the five-year partnership of Perrine and Bor, and their eternal desire to be the best in the world.

“It was awesome for Mel to get the monkey off her back by winning gold on day one. Success has given her more motivation and definitely gave her more confidence for the Super-G which showed in her results,” Geiger said.

“I’m really happy for her and Andy. After the disappointing campaign they had in Sochi last year, this week has been great for them so far.

“It’s obviously very ambitious to win all five gold medals here, especially in the slalom where they’ll face the Paralympic champions, but we’ll see. Andy knows exactly what Mel needs and they trust each other 100 per cent.”

In other Australian results, Mitchell Gourley (VIC) finished fifth in the men’s standing classification while Victoria Pendergast (NSW) did not complete the course in the women’s sit-ski race.

After tomorrow’s rest day at the 2015 IPC Alpine Skiing World Championships, competitiors will tackle the Super-Combined on Sunday. More than 100 athletes from 23 counties are competing at the Championship which run until 10 March. Watch it on live stream here: Panorama2015.com