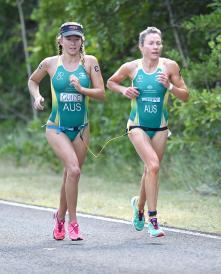 Triathlon Australia has hailed the commercial partnership between the Australian Paralympic Committee and the Seven Network as “another monumental step forward for Para-triathlon and Paralympic Sport in Australia.”

The Australian Paralympic Committee and the Seven Network today confirmed the signing of an historic agreement for an all-encompassing coverage of next year’s Paralympic Games in Rio.

They will create and deliver the most comprehensive, technologically advanced, multi-platform coverage of the Paralympic Games in Rio to all Australians on any communications device.

The 2016 Olympic and 2018 Commonwealth Games network will deliver 14 hours a day of live coverage on broadcast television across the network’s digital broadcast platform.

Triathlon Australia’s National Manager Para-triathlon, Kathryn Periac said the announcement is another monumental step forward for Para-triathlon and Paralympic Sport in Australia but she also acknowledged the ABC for their coverage between 1996 and 2012.

“While the ABC has delivered outstanding coverage of previous Paralympic Games, bringing the excitement, drama and personalities of the Paralympic Games to our lounge rooms since 1996, this transition to Seven West Media provides a larger integrated multiple platform media opportunity,” said Ms Periac.

“With a program of delivery to reach 16 million people a month for the 18 months leading into the Games, as well as at Games time.

“In addition the financial commitment announced today from Seven West Media to the Australian Paralympic Team, as well as the increased commercial coverage for the Australian Team sponsors and partners through a broader exposure, will all contribute to our Para-triathletes having the best support possible to deliver exceptional competitive results at Copacabana Beach on September 10 and 11, 2016.”

“The APC is confident that the quality and depth of Paralympic coverage provided by the Seven Network will set a new standard for the Paralympic movement, not just during the 12 days of competition, but for the 18 months leading up to the Games.

“The Seven Network has embraced the Paralympic ideals and we will do everything we can to ensure our new partnership plays an important role in shaping community perceptions of people with disabilities.”

The field will include six new Para-triathletes being classified and debuting, for a total field of 20 athletes.