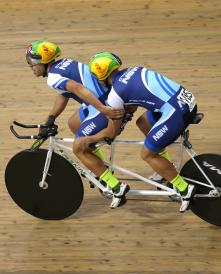 Two exciting weekends of racing in Adelaide loom large for Australia’s Para-cyclists with all important Paralympic Games points and national titles on the line.

The action begins with a two-day Para-Cycling UCI Event this weekend (April 11-12) which offers qualification points for the Rio 2016 Paralympic Games.

The UCI event has attracted more than 60 Para-cyclists from Australia, New Zealand, Korea and Malaysia, and will also act as Round 2 of the Cycling Australia National Para Road Series (NPS).

The following weekend’s 2015 National Championships (April 18-19) will also double as the third and final NPS round.

Both weekends will feature road races and time trials held across a number of classifications – bicycles, tandems, tri-cycles and hand-cycles in men and women’s categories.

“I am very excited to be taking part in the UCI event that Australia is hosting in Adelaide this weekend,” said the four-time world champion.

“This time of year it is always exciting to start the racing season and to have a UCI event in our own backyard is great.  I’m looking forward to welcoming the riders from Malaysia, Korea and New Zealand.

“My preparation has been going well and as it is just the start of the season, I will be training right through this event and Nationals as I look towards the World Championships at the end of July in Switzerland.”

In other entries, reigning Paralympic time trial champion David Nicholas (QLD) has recovered from a bout of pneumonia which forced his withdrawal from last month’s UCI Para-Cycling Track World Championships in the Netherlands.

The start and finish areas of both Saturday’s time trial and Sunday’s road races – beginning at 7am each day – will be located at the Trinity College Gawler River Campus.