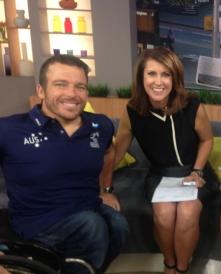 Seven signs all-encompassing agreement for rights across all media platforms for 2016 Paralympic Games in Rio.

The Seven Network, Australia’s most-watched broadcast television platform, today confirmed the signing of an agreement for an all-encompassing coverage of the forthcoming Paralympic Games in Rio.

Seven will create and deliver the most comprehensive, technologically advanced, multi-platform coverage of the Paralympic Games in Rio to all Australians on any communications device.  Seven will deliver 14 hours a day of live coverage on broadcast television across the network’s digital broadcast platform.

Tim Worner, CEO of Seven West Media, added: “We are delighted to be able to bring this extraordinary event to all Australians.  The Paralympic Games take sports to a new level, they inspire and we take with great pride our responsibility to provide the Games to all Australians across all forms of delivery platforms.

“The APC is confident that the quality and depth of Paralympic coverage provided by the Seven Network will set a new standard for the Paralympic movement, not just during the 12 days of competition, but for the 18 months leading up to the Games. The Seven Network has embraced the Paralympic ideals and we will do everything we can to ensure our new partnership plays an important role in shaping community perceptions of people with disabilities,” Mr Tasker added.

About the Australian Paralympic Committee

At the Australian Paralympic Committee (APC) we help Australians with disabilities participate in sport and compete at the Paralympic Games through partnerships with governments, business, sporting bodies and the community.

We are responsible for preparing the Australian Paralympic Summer and Winter Teams for the Paralympic Games, which we have done successfully since we were established in 1990. At the London 2012 Paralympic Games in which 164 countries competed, Australia was placed fourth on the overall medal tally with 32 gold, 23 silver and 30 bronze medals.

We help identify potential Paralympians through our Performance Talent Program and assist athletes to prepare for competition by providing support and funding for coaching, equipment and travel in the lead up to the Summer and Winter Paralympic Games and other major competitions.

At the 2012 Paralympic Games, 161 athletes from 13 sports were selected for the Australian Team, 43 of whom were identified through the APC’s Paralympic talent search activities.

For the 2016 Paralympic Games, we are aiming to select a team of more 185 athletes in 15 sports. We have set a goal to finish top 5 on the overall medal tally, as we have done at every Paralympic Games since 1992.

Our partnerships with governments, business, national sporting organisations and disability groups are critical to delivering a successful Paralympic Team to the Games.

As a registered charity, we value the support and contribution of our donors, which is essential to enable us to send Australian Teams to the Games.

At the heart of what we do are our athletes, who strive to compete at an elite level, upholding the ideals of the Paralympic movement.

Today’s agreement with the International Paralympic Committee further confirms Seven’s leadership in sports television with the network continuing to dramatically expand its coverage of major sports across its three digital broadcast television channels and accelerate coverage across online, IPTV, HbbTV, mobile and other emerging forms of content delivery.

Seven’s commitment to the Paralympic Games builds on the network’s unprecedented new agreement with the International Olympic Committee encompassing the Games of the XXXI Olympiad in Rio de Janeiro in 2016, the XXIII Olympic Winter Games in PyeongChang in 2018, the Games of the XXXII Olympiad in Tokyo in 2020, and the Summer Youth Olympic Games in Nanjing in 2014.  Underlining this new partnership is an option which, if exercised, extends the rights to include the XXIV Olympic Winter Games in 2022 and the XXXIII Olympic Games in 2024.

Seven has been recognised by the International Olympic Committee as a leader in Olympic Games coverage.

Seven is focused on delivering the biggest sports events to all Australians.  Today’s signing of the Paralympic Games in Rio also joins the Commonwealth Games on the Gold Coast in 2018.

The agreements for the Olympic Games, Paralympic Games and  Commonwealth Games on the Gold Coast builds on the company’s long-term commitment to, the National Football League, including the Super Bowl, The US Masters and Wimbledon as major international sports franchises for Seven.

Seven also has all-encompassing agreements for coverage of the Australian Football League Premiership Season, Finals Series, the Grand Final and Brownlow Medal, the Bathurst 12 Hour Endurance Race, all major horse racing events including the Sydney Easter Carnival, the Melbourne Spring Carnival and the Melbourne Cup Carnival, the Sydney-Hobart Yacht Race, all major Australian golf tournaments, all major iron man and triathlon events, all major tennis tournaments in Australia including The Australian Open and The Davis Cup, the Stawell Gift and the New South Wales Shute Shield in Rugby.