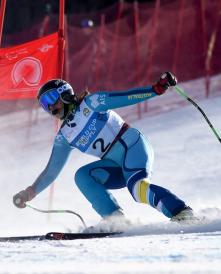 Guided by Andrew Bor, 27-year-old Perrine clocked a time of 1:45.80, to defeat the USA’s Danelle Umstead (1:46.32) and her husband guide Rob into second, and Russia’s Aleksandra Frantceva (1:51.47), guided by Semen Pliaskin into third place.

Perrine, who is currently ranked at number five in the world in downhill skiing, continued her strong streak of wins from the 2014/15 IPC World Cup season and is thrilled with the result.

“It’s always cool to win gold medals, but to pick up my first world title is another feeling all together,” she said.

“Throughout the season I had this in sight, but now that I’ve won one race, my focus is going to shift on doing the right thing on the snow for my four remaining races, perform at my best and hopefully more podium finishes will fall into place.”

While Perrine, who was the first Australian female in her sport to climb the World Championships podium in 2011, won by 0.52 seconds, Australian Paralympic alpine skiing coach Christian Geiger said she has the ability to further the gap between her and her competitors.

“Mel had a shaky start this morning, and was nervous ahead of the race. This week in training she hasn’t been able to produce her best, but now that she’s won a medal in her first race, I’m looking forward to seeing how this changes and how she performs throughout the rest of the week,” Geiger said.

Perrine’s successful season and world title win is a staggering turn-around from her Sochi Paralympic campaign last year, where she struck a run of bad luck that resulted in a fourth place finish, three DNFs and one disqualification.

Races continue tomorrow when Perrine will compete in the Super G along with Australian athletes Mitchell Gourley and sit-skier Victoria Pendergast, beginning at 11am (MST). Gourley was the only other Aussie in action on day, but failed to complete the course.

The 2015 IPC Alpine Skiing World Championships, featuring more than 100 athletes from 23 counties, run until 10 March and will be streamed live at Panorama2015.com