Para-canoeists on track for success 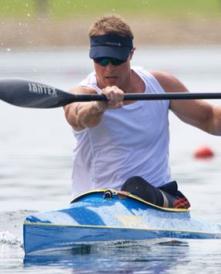 As the Para-canoe athletes have been battling it out over the past week, it is clear that the Aussies are well on track to be top contenders at both the World Championships later this year, as well as the 2016 Paralympic Games in Rio de Janeiro.

According to Australian Para-canoe head coach Andrea Wood; Curtis McGrath and Amanda Reynolds are two athletes to watch as the World’s approach.

Despite having to swap crafts, McGrath is well on his way to international glory following a stellar performance at nationals.

“Curt McGrath is definitely one to watch later this year. We saw it last year, he came into the sport in January and he managed to go from a beginner to world champion in that time frame,” Wood said.

“Unfortunately this year we have found out that the craft he was paddling at the time has been taken out of Rio and he’s had to swap into the K1 and his trajectory in the K1 has been very similar, so he’s on track for podium performance come the World Championships in August.”

On Amanda Reynolds, Wood said “she was on the podium at the World Championships last year and I think she can do it again this year, and I’m sort of hoping that the colour of the medal increases as we go.”

The 2016 Paralympics will be the first time that paracanoe has been included in the event and Wood says that it will be a great opportunity for the athletes to demonstrate their capabilities on the world stage.

Andrea Wood has been working hard with the team to give them the best chance to qualify for the Paralympics.

“I’ve started really to narrow down on just the real coaching aspect and making sure that we’ve got athletes that are on target to qualify boats for Rio and then on target for podium performances in Rio itself,” Wood said.

The performances at this year’s Nationals have helped to determine who will be representing Australia at the World Championships.

Woods has been thrilled to see the competition this year at the Nationals and said that the Aussies are in a good position to qualify a number of places in the Paralympics.

“It’s been really promising from a selection point of view, we’ve had people race all the Paralympic events.

“We really just have to wait until May with the new classification system coming in to make sure that those athletes then are eligible” Wood said.

“I think we’re on target for at least a couple of medals in Rio.”