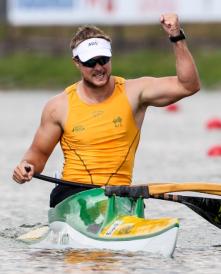 McGrath, who lost both his legs in an IED explosion while serving in Afghanistan in 2012, qualified for this year’s Para-canoe world championships.

What made his efforts even more outstanding was that just months ago he was told the boat he’d been training and competing in would not be on the Rio 2016 program.

But rather than throw in the towel, McGrath switched to a kayak class that would be in Rio, and put all his efforts into learning new skills.

“Initially I was very doubtful about being ready by the time the Nationals came around, but through the training and the coaching and the support system that Australian Canoeing and Para-canoe Australia has put forward, it’s given me the chance to perform,” a relieved McGrath said today.

“The nerves were kicking in. What would happen if I slipped up, but it’s all paid off, the training has worked.”

While McGrath was a red-hot favourite to win gold in the canoe class before it was scrapped from the program, the Queenslander knows he has plenty of work to do in the kayak.

He’s not worrying yet about Rio, preferring to focus on the World Championships in Milan.

“I believe I can do it this year, and then we’ll worry about next year,” he said.

In other medal results on the opening day of competition, there were para-canoe gold medals for Amanda Reynolds, Susanne Seipel, Sam Bloom and Brock Ingram.