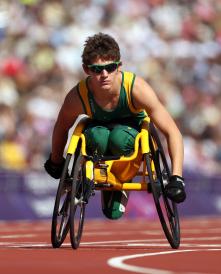 After winning silver medals at London 2012 and the 2013 World Championships, Rheed McCracken is gearing up for his most important year yet.

It is fitting that the first-ever IPC Athletics Grand Prix to take place in Australia will do so with one of the country’s rising stars of para-athletics as one of its central figures.

And for the McCracken, this week’s event in Brisbane (6 – 8 March) is not only a personal opportunity to demonstrate his huge potential but for para-athletics to show the strides it has taken in recent years.

McCracken has been one of the up and coming forces in T34 wheelchair racing in the last few years and the Grand Prix, which also doubles up as the Queensland Open Athletics Championships, could well be his stage to become the new Aussie poster boy of Para-athletics.

The 18-year-old burst onto the scene at the London 2012 Paralympic Games when he won silver in the 100m and bronze in the 200m T34 behind Tunisia’s Walid Ktila. McCracken’s rivalry with the Paralympic and world champion could be a defining battle at this October’s IPC Athletics World Championships in Doha, Qatar.

But first McCracken is focussing on making the Brisbane Grand Prix a huge personal and sporting success.

The 18-year-old explained: “The meeting is really important for Paralympic sport in Australia as it’s our first IPC Athletics Grand Prix and it shows how the movement is going forward.

“Paralympic sport has really grown in the last few years – thanks to people like my mentor Kurt Fearnley and Evan O’Hanlon – and now I’ve just come along, trying to jump on the bandwagon!”

The Grand Prix is being held in a nation synonymous with top-class sport and McCracken feels that the event will tap into the country’s sporting psyche.

“Everyone in Australia dreams of wearing the green and gold in whatever sport they love – it’s ingrained in kids in school and those who get to do it is a privilege.

“Those people inspired me to want to compete in Paralympic sport – that’s why the Grand Prix is really important for us in the movement,” he said.

Ever since McCracken qualified for the 2012 Paralympic Games as a 14-year-old, he has been earmarked as an athlete destined to reach the top. His Paralympic silver medal in the 100m T34 did nothing to dispel those assessments – nor did his three silvers at the 2013 IPC Athletics World Championships over 100m, 200m and 400m T34 in Lyon, France.

Of course now, with even more international race experience under his belt, McCracken is aware of the different pressures that can arise.

“When I first started racing against people like Walid, I just used to show up, push as hard as I could and didn’t realise what race strategy was,” McCracken laughs.

“In London in 2012 I just went for broke but now I think things have changed. I understand the technical side of the event a lot more and I’m more aware of strategy. So I think opponents are more aware of what I’m about now and I’m not looked at as the one who just gets in the way.

“The fact that Walid has mentioned my name in interviews this year is amazing – I respect him hugely and it’s great to see that he respects me too.”

But it is not just Ktila that McCracken is thinking about ahead of the Grand Prix circuit and October’s World Championships.

“One of the big things about our sport is that you never know who can come along with great performances and you have to watch the opposition,” he explained.

“Canada’s Austin Smeenk showed me up in the 800m when he came out here in January for the Summer Down Under Series which was a big wake-up call for me.

“I keep an eye on all the results during the year – but especially as we move nearer the World Championships.”

The teenager’s world has changed since he alerted the world to his talent in London – but at the time, McCracken thought that might be as a good as it got.

“I remember thinking that I might have peaked in London, but I was so young, and still am, so I don’t really know what more there is to come or when I might reach my peak,” he explained.

“Rio next year is a big, big aim and I need to be fit and in good shape there. At the World Championships in 2013 I wasn’t as fit as I was in London and it’s really important that you turn up for major championships feeling as good as you can.

“At the moment, I feel great. I’m in good shape and training with my coach Andrew Dawes has been going really well. I feel better now than I did in 2012.”

That is an ominous sign for McCracken’s T34 competitors in 2015.

Around 125 athletes from six countries will take part in the second IPC Athletics Grand Prix of 2015, the first time such an event has been held in the Southern hemisphere.