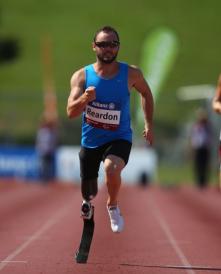 Australia’s Kobie Donovan took centre stage with a new world record in the field as Australia played host to the IPC Athletics Grand Prix series for the first time ever on Saturday 7 March.

Donovan (F40) secured a new world record in the women’s discus (ambulant). The 21-year-old threw 16.32m in her penultimate attempt to take the top spot based on points ahead of her compatriot Claire Keefer (F41), who managed a best throw of 20.98m.

“I thought I executed a good race. The blocks moved around a little bit in heats but I was really confident coming in to the final. I’m running well and I think I can maintain that momentum towards the World Championships,” said Perris.

“It’s great having an international meeting here in Australia,” said Reardon. “The future of international Paralympics, especially in athletics, revolves around the IPC circuit doing really well. If we can start to build it throughout the world to make it the equivalent of the Diamond League it would be ideal.”

“I was focussed on what my coach had said, with my warm up and my drills, and so I ran a really good race – I’m one happy girl,” said Pardy after her win.

In the men’s wheelchair races, Australia’s world championship finalist Sam Carter (T54) triumphed in the 100m, with a time of 14.88, with his compatriot Matthew Cameron (T54) second in 15.04. Richard Colman (T53) finished third.

Cameron turned the tables on Carter in the 400m, clocking 50.60 to cross the line in first place with Carter second in 51.29. Australia’s triple world silver medallist Rheed McCracken (T34) crossed the line third in 54.59.

McCracken said: “I was really happy with the times today.  It felt like all my training is paying off. So far the few 800m races I’ve done this year I’ve gone faster and faster.

“This event rally puts Brisbane on the map, it’s such a fast track here so hopefully we can get even more people here next year.”

Brayden Davidson (T36) from South Australia leapt 5.27m to win the men’s long jump (ambulant) based on the points system. The 18-year-old got the better of his countryman Nicholas Hum (T20), finalist at the IPC Athletics World Championships in Lyon, France 19 months ago, who managed a best of 6.88m with his final leap of the day.

The next IPC Athletics Grand Prix will take place in Tunis, Tunisia, between 23-25 March.