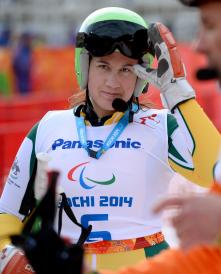 The dream of winning all five gold medals on offer at the 2015 IPC Alpine Skiing World Championships may be over for Melissa Perrine, but a bronze medal in the women’s vision-impaired Giant Slalom overnight means five podium finishes still can be achieved.

The 27-year-old Perrine from Mittagong in NSW will be aiming for the rare feat on Wednesday when the final race – the slalom – is fought out in Panorama, Canada to bring the championships to a close.

After securing three world titles with victories in the Downhill, Super-G and Super-Combined, Perrine’s golden run at the championships finally came to an end early Monday morning (AEDST).

Perrine and Bor were the fastest pairing in the second run, but a couple of mistakes in their first run was enough to stifle their unbeaten streak.

Still, the Australian duo will take plenty of confidence into Wednesday’s Slalom after they posted the fastest Slalom run in the Super-Combined on Saturday on their way to victory.

Australian Paralympic alpine skiing coach Christian Geiger said Perrine and Bor were now even more hungry to finish their career-best event on the perfect note, after having tasted defeat for the first time.

“The message I have given Mel and Andy is to keep going and to stay postive,” Geiger said.

“They haven’t looked too far ahead this week, they have both focussed on the process and not the result which has been working so far.

“We know that if they ski at their best, they’rehard to beat. Their slalom [during the Super-Combined] was great earlier in the week, they beat the current Paralympic champions [Frantceva and Pliaskin] which shows what they are capable of.”

Perrine’s team-mate Mitchell Gourley was the other standout in the Giant Slalom, finishing fourth in the men’s standing classification.

Gourley, from Geelong in Victoria, was in the bronze medal position after the first run but posted the fifth fastest time in the ultra-competitive second run to fall off the podium by 0.39 seconds.

In other Australian results, sit-skiers Mark Soyer and Victoria Pendergast failed to finish in the men’s and women’s categories.

The 2015 IPC Alpine Skiing World Championship conclude on Wednesday when the Slalom is contested. The race will be streamed live at Panorama2015.com alongside live results.

Official results are available at paralympic.org/alpine-skiing/calendar-and-results.