Bellis and Ross claim gold in first finals of SIRR 2015 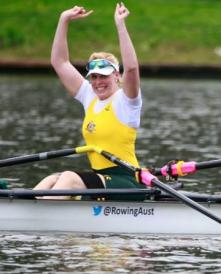 Due to limited competitors in the Trunk and Arms events, Ross and Bellis actually competed against each other in their respective finals, while normally the duo race together in the Australian TAMix2x.

Ross racing for the Australian National University and the National Training Centre, Canberra won her race in a time of 4 mins 31 seconds on a beautiful day at the Sydney International Regatta Centre.

Post-race Ross said: “I think that’s my ninth national title in a row and it feels great. The conditions were really presentable today, little bit of everything out there but good maintainable conditions and it was a nice race.”

Bellis, who was representing Powerhouse Rowing Club and the National Training Centre, Canberra said post-race: “For me it was quite daunting actually racing Kat in this as Kat is very fast and for me to try and stay ahead of her is actually very hard, so I’m glad I technically got away with a win over Kat this time.”

“It’s great to be rowing amongst everyone this week, it’s as it should be, we just row a shorter distance, and that’s the only difference. Everyone gets behind everyone here and that’s what’s so exciting and makes it an enjoyable regatta,” added Ross.

On Saturday afternoon, just before 5pm, there will be an exhibition race from Australia’s top para-rowers who will compete over the full 2000m course at the Sydney International Regatta Centre. Normally, para-rowing events are contested over 1000m and the exhibition is something Bellis is looking forward to competing in.

“That will be an interesting afternoon when we race off against fellow para-rowing World Champion Erik Horrie, who will be in the Arms and Shoulders Single Scull, as well as the Australian Legs, Trunk and Arms Mixed Coxed Four. If the weather is kind to us, I think it will make for a great race for spectators,” said Bellis.

This year has seen the most entries to date in the Legs, Trunk and Arms Men’s Single Scull with a total of 12 entries, including two from the Hong Kong Para-Rowing Team.

Cameron Crombie (Canberra RC/ACTAS) and Kevin du Toit (UTS) qualified for the final from Heat One, while from Heat Two it was St George’s Stephen Knott and WARC’s Kevin Wall who automatically qualified.

Tomorrow’s racing will see finals commencing from 08:05am until lunchtime, with finals for a number of underage crews, Open Men’s and Women’s events as well as various Para-Rowing finals.