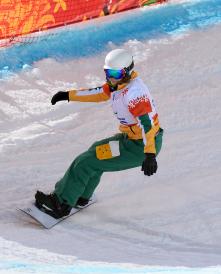 Para-snowboarder Joany Badenhorst has proved that not even a broken wrist can stop her from rising to the top of her sport, having won silver at the 2015 IPC Snowboard World Championships on Saturday.

20-year-old Badenhorst competed in the banked slalom, wearing a cast after fracturing her wrist in a training fall last week, but did not let her injury impact her performance.

Most impressive was Badenhorst’s time of 1:42.87, only 9.42 seconds behind Dutch Paralympic gold medallist Bibian Mentel-Spee (1:33.41), showing she has the ability to close the gap between herself and the undefeated athlete in the coming seasons. Badenhorst also finished 1.78 seconds ahead of US rider Heidi Jo Duce (1:44.65).

Having only begun snowboarding in mid 2013, the results seen in her second season are a testament to her being a medal prospect at the PyeongChang 2018 Winter Paralympic Games.

Badenhorst will now return to Australia for a well-deserved break before beginning the Southern Hemisphere training season.