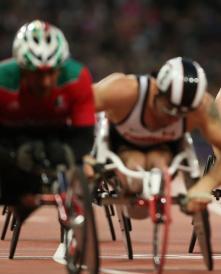 Jason Hellwig has announced he is stepping down as Chief Executive of the Australian Paralympic Committee (APC).

APC President Glenn Tasker today acknowledged the significant contribution Hellwig has made during his time with the organisation.

“When Jason started with the APC, our profile was low and the position of Paralympic sport in the overall landscape of Australian sport was closer to the margins than the centre,” Tasker said.

“In 2015, Paralympic sport is now integrated into National Federations, more people than ever now take Paralympic sport seriously, and the performance of the Australian Paralympic Team is a centrepiece of Government sport policy.

“Jason has always been incredibly focussed on ensuring the athletes and their experience is at the core of everything the APC does and I congratulate him on what he has achieved.”

“After having the privilege of working for the APC for 12 years, five of those as CEO, I feel that the time is right for me to move on,” Hellwig said.

“I am incredibly fortunate to have been able to work with some of the most outstanding athletes, coaches and support staff in world sport.

“It is their professionalism and dedication to excellence that has seen the Australian public embrace the team and look forward to each Games.  Perhaps what’s even more important is that the power of the team has translated all the way back to community level.

“People with impairments are getting opportunities to play sport at their community level and sport is proving to be a great vehicle to changing attitudes and lives.

“I’m proud that the growth of the Paralympic movement in recent years has empowered the Seven Network to bring the Rio Paralympic Games to Australian homes in 2016.  It is a new, exciting opportunity with huge potential and I can’t wait to join the Australian viewers who will be watching in record numbers.

“One of the main things that attracts the nation to Paralympic Sport is the incredible culture that underpins everything we do both as an organisation and the way our athletes prepare for Games time.

“Paralympic Sport, perhaps more in this country than any other, is rapidly changing and evolving and it is important the APC continues to evolve at the same pace and I believe it is time for it to launch into a new era.”

“With Rio now less than 18 months away, recent performances from athletes across several key sports have shown that Australia is well placed for success in Rio and I am confident about our chances for success next September.”

Mr Hellwig, his wife and two sons have chosen to move back to Melbourne to be closer to their extended family.

Mr Tasker stated that the Board have begun the recruitment process for a new CEO.