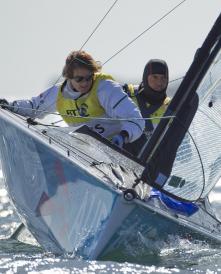 The International Paralympic Committee has determined the sporting programme for the Tokyo 2020 Paralympic Games with Sailing and 7-a-side football having been removed from the programme.

The decision was published by the IPC over the weekend .

Yachting Australia and the Australian Paralympic Committee have expressed their extreme disappointment about the decision to remove sailing from the sporting program at the Tokyo 2020 Paralympic Games.

The news is an enormous disappointment for the sport of disabled sailing worldwide and for the Australian Sailing Team and Squad athletes who are working hard, not only towards Rio 2016, but also towards Tokyo 2020.

Yachting Australia President Matt Allen said, “The decision to take sailing out of the Tokyo 2020 Paralympic Games has left us stunned. We will consult with our ISAF colleagues to support the case for sailing and for all avenues to be explored for the Tokyo 2020 Paralympic Games and beyond.  We have spoken with the Australian Paralympic Committee who have offered their support and sought clarity on the decision from the International Paralympic Committee”, added Matt.

This is a loss to Paralympic sport as a whole as sailing provides unique opportunities for athletes with a disability to get involved with and participate in high performance sport and to compete on a world-class and paralympic level. Para-sailing caters for athletes with a wide range of physical impairments including those with high level disabilities such as quadriplegia, allowing sailors to steer and control boats using just a finger, toe or breath.

Australian Paralympic Committee President Glenn Tasker said: “Like our Yachting Australia and Australian Sailing Team colleagues, we are worried that this decision will have serious implications for the sport at all levels. But the APC remains fully committed to the Australian Paralympic sailing program and its athletes, and we are currently seeking more details from the International Paralympic Committee to gain a greater understanding of the avenues which may exist for the sport to be reintroduced in 2020 or at a later date.”

Australian Sailing has already qualified all Paralympic boats for the 2016 Rio Paralympic Games and only on the weekend, Paralympic gold medallists and IFDS World Champions Daniel Fitzgibbon and Liesl Tesch won their second consecutive gold medal at the Sailing World Cup in Miami.

“I, like the rest of the sailing community, was completely stunned by the news that sailing has been excluded from the 2020 Paralympic Games, Paralympic silver (2008) and gold medallist (2012) Daniel Fitzgibbon said from Miami.

“I have already visited Tokyo and inspected the sailing venue as have we invested considerable time and money in assets to be used for these games, so to say it took me by surprise would be an understatement.”

“Sailing is the only Paralympic sport that allows quadriplegics, such as myself, to compete against much more able athletes on an even and fair platform. And to take this opportunity away from future athletes in my situation, or worse, is a very disappointing decision.”

Yachting Australia will be discussing the situation with ISAF Disabled Sailing Committee as well as with the Australian Paralympic Committee over the upcoming weeks.

In the meantime we will continue to work diligently with our Paralympic athletes, supporting them towards the IFDS World Championships at the end of the year in Melbourne as well as on their road to Rio 2016.

The same events were on show at Athens 2004 before the SKUD18 was introduced for the Beijing 2008 Paralympics Games as the equipment for the two-person dinghy outlining the evolution of sailing at the Games.

Athletes compete in three events, which are non-gender specific: The single-person and three-person keelboats are open to most impairment groups.  The two-person keelboat event is specifically designed for athletes with a severe impairment.