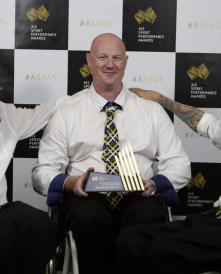 Three-time Paralympic gold medallist Fearnley took out one of the major awards of the night, the people’s choice award for Sports Personality of the Year, while the Steelers’ world championship winning performance in 2014 saw them win Para Performance of the Year.

As a way of engaging the Australian public, the AIS called upon the nation’s sports fans to decide on Australia’s top sporting personality.

Fearnley, who in 2014 won his fifth New York Marathon title, was up against some of Australia’s most recognisable sporting icons including Tim Cahill, Sally Fitzgibbon and Mitchell Johnson.

“I wouldn’t have picked this in a thousand years. I’ve had some good wins over the years but to be given the airplay to be able to be compared with some of the absolute mainstream sports with grassroots support behind them, I wouldn’t have imagined I would have got a run with that,” Fearnley said.

“It’s nice to sort of be pulled out from amongst a pretty heavy crowd to win an award which is kind of sport, kind of life, and about how you hold yourself! I’ve had some good wins and some pretty good losses and it’s nice to know the people around me are there.”

“Paralympians like Kurt continue to impress Australians with their passion and commitment to Paralympic sport, as well as their ability to achieve international success,” Tasker said.

“The award recognises how much Paralympians can inspire both able-bodied and people with a disability across the country. Kurt is a great example of why the Paralympic movement has grown to where it is today; this achievement is something he should be incredibly proud of.”

The Para Performance of the Year award given to The Steelers recognised the history-making year the team enjoyed in 2014.

Lead by Head Coach Brad Dubberley, the team won their first World Championships title and saw them become only the second team to hold the Paralympic and world titles concurrently.

“London 2012 saw the Steelers win their first Paralympic gold, a goal they had in sight for quite some time, but winning the World Championships last year really cemented them as the world’s number one wheelchair rugby team,” said Tasker.

“Each member of the Steelers deserves to be recognised for their determination, and I look forward to seeing them retain their place as number one until the Rio 2016 Paralympic Games and beyond.”

Nominations for the Para Performance category included Curtis McGrath who in his second year in Para-canoe won a world title, and the Paralympic gold medal winning men’s wheelchair basketball team, the Rollers.