Maroney honoured at Awards of Excellence 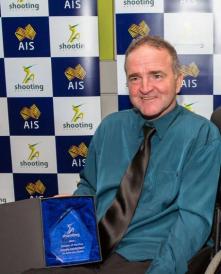 Shooting Australia celebrated the sport’s best last night, at its Awards of Excellence in Sydney, with over 150 guests, including dignitaries in attendance.

The Para-Shooter of the Year award was presented by Michael Hartung, General Manager, Sport at the Australian Paralympic Committee. Jason Maroney was the most outstanding athlete in the Paralympic discipline, earning two World Cup titles and recording a fourth place finish at the International Paralympic Committee World Championship last year.

Hartung commented on how well the Australian para-shooters had performed and congratulated Maroney on his dominance in the Paralympic discipline. Hartung also acknowledged London Paralympic bronze medallist Natalie Smith (QLD) and 11-time Paralympian Libby Kosmala (Keswick, SA), who were both in attendance.

Shooting Australia CEO Damien Marangon closed the night with thanks to major sponsors, whilst also acknowledging the collective effort of everyone involved in the success of the Shooting Sports.

“Well done to all our athletes, keep doing what you do, and together, we can make it even better. To our coaches, volunteers and officials, this sport would not go on without you, so thank you,” Marangon said.